Why are there upper limits for trace elements? The example of iodine

Evaluating the safety of humans (as consumers and processors), animals and the environment is the primary concern of the various panels of the European Food Safety Authority (EFSA).

The “Panel on Additives and Products or Substances used in Animal Feed” (FEEDAP Panel) looks at not only essential additives (e.g. amino acids, trace elements, vitamins) but also non-essential ones (e.g. enzymes, colourants, flavourings, micro-organisms, technological additives etc).
Various trace elements need particular attention, in the interests of animal protection (iron (Fe), molybdenum (Mo)), environmental protection (copper (Cu), zinc (Zn)) and consumer protection (iodine (I), selenium (Se)). This article will analyse the FEEDAP Panel’s recommendations for preventive consumer protection in more detail, and explain them using the trace element iodine as an example.
According to various scientific bodies, human iodine need is between 40g/d for babies and 150g/d for adults (up to 250g/d during pregnancy and lactation). The upper limit (UL) for iodine in food is between 500 and 600g/d for adults in Europe, while the UL in other regions (e.g. Australia, America) is 1100g/d. Iodine need for farm livestock varies between 0.15 (piglets) and 0.6 mg/kg DM (pregnant and lactating sows). 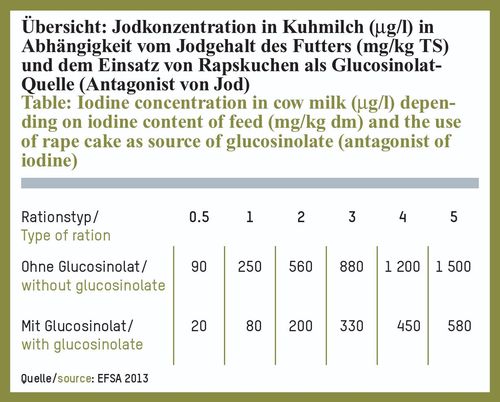 In evaluating the human iodine intake and the possible contribution of iodine from foods of animal origin, the FEEDAP Panel first looks at other iodine sources in human food. Drinking water does not play a major role as a source of iodine in Germany. Whereas in northern Germany (coastal regions) the iodine content of the water varies between 1 and 10g/l, in southern Germany it lies between 0.5 and 1g/l (Alpine regions). For countries close to the sea (e.g. Denmark, UK) the iodine content of drinking water is cited as >100 g/l in some cases (particularly on islands). There is information from south-east Asia that drinking water can contain >300 g/l of iodine.
When the links between iodine deficiency and goitre were recognised, ways were sought to deliberately supplement food with iodine. Supplementing table salt with iodine was introduced in Switzerland as early as 1922 (1976 in Germany). WHO (2008) recommends 20 to 40 mg/kg of iodine in table salt, so that 1 g of salt can cover around 10 to 20% of adult need for iodine.
With the exception of algae and other salt water plants (seaweeds), food of plant origin is mostly low in iodine (<100 g="" kg="" the="" maximum="" content="" in="" salt="" water="" plants="" is="" shown="" as="" up="" to="" 8="" iodine="" dm="" so="" that="" regions="" where="" such="" are="" part="" of="" diet="" e="" japan="" an="" intake="">1,000 g/d is not unusual.
Of the foods of animal origin, salt-water fish are the richest in iodine. They can contain >1000 g of iodine per kg of edible matter (e.g. cod, sea urchins, pollack etc.
The iodine content of milk and eggs depends essentially on the iodine supply of the animals.
This was already known at the time of the first discussion on the FEEDAP Panel (2003–2005), so that the EFSA proposed a reduction in the iodine upper limit for complete feed for dairy cows and layer hens from 10 to 5 mg/kg feed (EFSA 2005; The EFSA Journal 11(2): 3101), which was implemented by the European Commission.
At the same time the EFSA suggested dosage-effect trials with dairy cows and other food-producing animals, to get better estimates of human iodine intake from such foods.
The results from extensive series of trials showed that there is a certain iodine enrichment, particularly in milk (see overview) and eggs, so that under certain conditions the upper limit of 2 mg iodine/kg DS can be reached with one litre of cow’s milk.
These developments and the increase in the iodine content of eggs caused the FEEDAP Panel to propose to the EU Commission (EFSA-Journal 2013; 11(2): 3101) a further reduction of the iodine content of feed for dairy cows from 5 to 2 mg/kg and from 5 to 3 mg/kg in feed for layer hens. The EU largely adopted these proposals, but left scope for individual countries (e.g. those not iodising table salt) to use the earlier upper limits. The iodine content after feed supplementing rose only insignificantly in meat and edible offal.
Similar considerations (of consumer protection, and here specifically protection of infants) by the FEEDAP Panel resulted in limiting the addition of selenium from yeast or methionine (organic selenium) to feed (max. 0.2 mg organic selenium/kg feed).
Another candidate would be molybdenum, where the upper limit in feed (only requested for sheep) is well short of any worrying level for consumers but had to be set relatively low for reasons of animal protection.
All other essential trace elements, at least in the currently permitted compounds, are mainly excreted in manure and do not reach any critical concentrations in foods of animal origin.