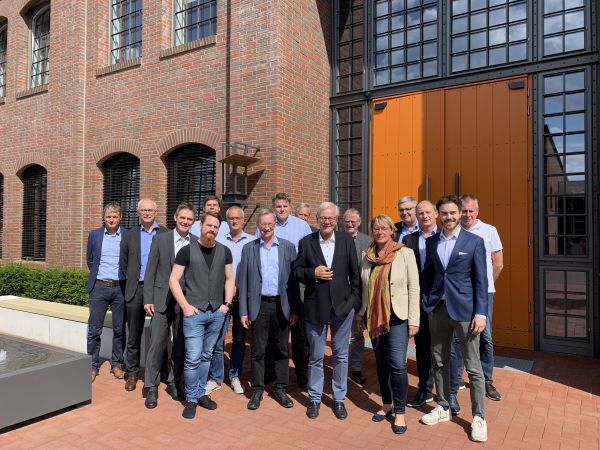 
Under the direction of Uwe Bartels, Chairman of the Agricultural and Nutrition Forum Oldenburger Münsterland (AEF), the inaugural event of the Ad Hoc working group "Climate Protection" took place on 12. 8. 2019 in the training rooms of Big Dutchman International GmbH. The top-class working group of experts from industry, associations and science was formed at the suggestion of the Lower Saxony Prime Minister Stephan Weil and the Agriculture Minister Barbara Otte-Kinast in the short term by the AEF. At the recent meeting of an AEF delegation with the Prime Minister and the Minister of Agriculture in the guest house of the state government, both government representatives had described it as desirable, if the entrepreneurship of the agricultural and food industry of the Oldenburger Münsterland had its own strategic goals and concrete measures to increase the climate protection services of the sector and to reduce greenhouse gas emissions. The result should be a master plan.
It is clear to all involved that the agri-food sector should balance the challenges of global food security, adaptation to climate change and the contribution to increasing their reduction shares. This is precisely why it is of particular importance, according to the AEF Chairperson, that those concerned throughout the entire value chain proactively shape the adaptation process with their own proposals.
The meeting was the starting point for the working group, which wants to present a result to the state government until September 20, 2019. The renowned scientist Prof. Dr. Harald von Witzke, formerly Humboldt University Berlin, takes over the scientific support of the working group.
At the first meeting, the Minister of Agriculture, Otte-Kinast, was pleased to welcome the members of the working group and to underline the importance of the work. The Ministry of Agriculture is working on the working group with the department head Prof. Dr. med. Theuvsen be represented.