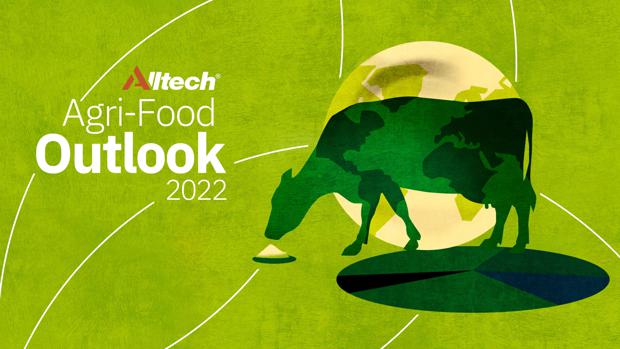 Global feed production increased by 2.3% last year despite multiple challenges. This is according to the latest Alltech Agri-Food Outlook 2022, with the strongest growth recorded in China. That gives optimism for further growth this year.


The global COVID-19 pandemic had a significant impact on the agri-food sector, causing disruptions in supply chains and accelerating the adoption of new technologies and environmental sustainability practices. Despite these challenges, feed production developed positively. The amount of feed produced globally is estimated at 1.235 billion tons in 2021, up 2.3% from the previous year. This is according to the latest Alltech Agri-Food Outlook 2022, which analyzed data from more than 140 countries and over 28,000 feed mills.

The top ten feed-producing countries in 2021 were:


These ten countries produce about 65% of the world's feed production and can be considered as indicators of agricultural development. In addition, the combined feed production of these countries increased by 4.4%, compared to the overall global growth of 2.3%.

The country with the largest growth by tonnage was China, with an 8.9% increase. Alltech believes one reason for this is the ongoing consolidation and modernization of the country's feed industry. For example, hog farms are no longer using food waste as feed, but are increasingly using professionally produced feed. Added to this is the recovery and continued modernization of the hog sector.

Looking at the feed types, a differentiated picture emerges.

Pig feed: production increased significantly by 6.6%, mainly due to the recovery of the Asia-Pacific region from African swine fever (ASF), especially in Japan, South Korea, Malaysia and China. However, Indonesia, Myanmar, the Philippines, Thailand and Vietnam continued to feel the impact of the disease. In Europe, countries where ASF is not or no longer a problem were still affected by a surplus of pork due to lower demand from China.

Poultry feed: the volume of laying hen feed decreased slightly by 1.4%, while broiler feed production increased by 2.3%. This is because the laying hen industry is facing challenges in many countries, according to the study, due to high raw material costs combined with stagnant or low retail egg prices. Animal welfare is also playing a role due to the move away from caging and the increase in free-range production in many countries. In Europe, the largest declines were in Norway, Russia, Ukraine and Poland, the report adds. Asia-Pacific also saw declines, while tonnage in Australia increased by 4%.

Cattle feed: global production decreased by 1.9%. The industry continues to be challenged by the requirement to reduce greenhouse gas emissions and the perception of environmental and health impacts. European markets are particularly focused on reducing greenhouse gas emissions to align with COP26, the EU Green Deal and the FEFAC Feed Sustainability Charter 2030. Argentina experienced a significant decline due to lower exports. In addition, high inflation and the devaluation of the national currency are also affecting the purchasing power of Argentines, although export regulations are being relaxed and could have an impact on Argentina's 2022 outlook.

Aquaculture: the aquaculture industry continues to grow in many markets, posting impressive growth of 3.7%. Recirculating aquaculture systems (RAS) are becoming more common and consumer demand for fish is increasing. Markets with ASF issues experienced additional growth due to reduced pork supply. India saw a significant 9% increase in its aquaculture feed tonnage; Indonesia also accounted for 10% of growth in the Asia-Pacific region. In Latin America, Chile, Brazil, Honduras and Ecuador contributed to regional growth of 5.6%.

Pet food: Production recorded the highest growth among the sectors, increasing by 8.2%. According to the study, this significant increase was largely due to the increase in pet food production in the wake of the COVID 19 pandemic.

„We see the resilience of the agri-food sector and, even more importantly, is the modernization and the adoption of more sustainable practices occurring in parallel.“
Dr. Mark Lyons, Präsident und CEO von Alltech

The trend in compound feed production is also not the same in all regions.

- Latin America achieved moderate growth of 0.5%; Brazil remained the leader in this region in terms of feed production, ranking third in the world after China and the U.S.

- Asia-Pacific had the largest regional growth at 5.7%; the region includes several of the top ten feed-producing countries, including China, India and Japan.

- Africa saw growth of 2.4%; despite challenges from high commodity prices, foot-and-mouth disease, and geopolitical tensions that have impacted exports of food of animal origin and led to commodity shortages in some areas.

Alltech works with feed producers, industry associations and government agencies worldwide to provide data and insights each year to evaluate global feed production. Alltech's international sales team compiled information on compound feed production and compound feed prices in the last quarter of 2021 with the support of local feed associations. The figures are based on calculations and are intended to serve as a source of information for industry stakeholders. Now in its 11th year, Alltech's Outlook is based on data from more than 140 countries and more than 28,000 feed producers.

Overall, Alltech's Outlook offers a positive sentiment and the outlook for the global feed industry is for continued growth. "The results of the 2022 Alltech Agri-Food Outlook report reinforce our confidence and optimism about the future of the agri-food sector," said Dr. Mark Lyons, Alltech president and CEO. "We see the resilience of the agri-food sector against the challenges of COVID-19, disease and supply chain disruption, and, even more importantly, there is evidence of growth, modernization and the adoption of more sustainable practices occurring in parallel."