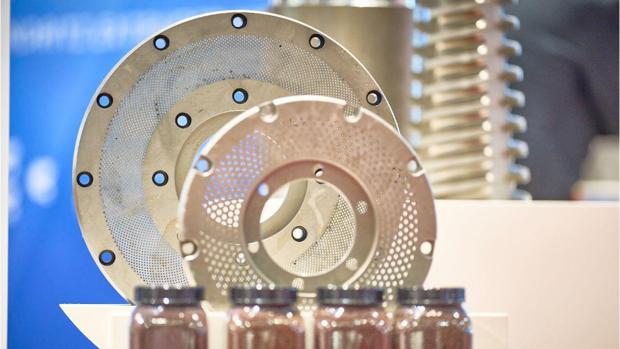 Andritz
Andritz's Microfeed system includes an optimized nozzle that can withstand the higher pressure due to a stronger design, larger diameter, and greater open surface area.

Andritz has developed a new system to efficiently produce small microfeed pellets for aquaculture. This is said to make a capacity increase of up to 40% possible.


"In the past, the capacity for small microfeed pellets below 2 mm was limited by the die, as it was subjected to higher pressure due to the smaller holes," explains Michel Pereira, global application manager for feed and biofuels at Andritz. "For larger pellets, the extruder is the bottleneck, so for microfeed pellets, the extruder is typically operated at 25-40% of full capacity to avoid destroying the die. Demand for small pellets has increased, and the question has always been: how can we produce microfeed at full extruder capacity?"

Andritz's Microfeed system includes an optimized die that can withstand the higher pressure caused by the smaller holes due to a stronger design, larger diameter, and larger open surface area, as well as a smart die base that allows the feed to be evenly distributed toward the larger die. This combination, it says, allows customers to produce microfeeds with higher capacity than nozzles previously used for microfeeds, with higher quality for sink feeds smaller than 2 mm, and with higher uptime when combined with the Expansion Control System (ECS) because it significantly reduces clogging.

According to Andritz, the system is mounted on an extruder barrel section that also has a special venting unit. This unit provides additional flexibility in managing a wider variety of raw materials in sinking fish feed production, resulting in greater accuracy and control through real-time adjustments, higher quality and yield, it said.

"The Microfeed System will change the face of microfeed production," said KP Angamuthu, regional director, APAC. "We are constantly evolving our portfolio of equipment solutions to better support our customers in this industry. With capacity increases of up to 40%, the added value we can offer micro feed producers is more than significant. We have already sold 12 systems before the official launch."