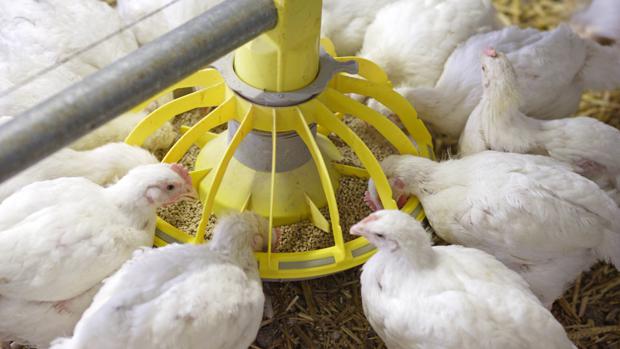 imago images/Countrypixel
Preventive use: In poultry fattening, antibiotics are mixed into the feed.

Fewer antibiotics are to be administered in animal husbandry. With its "farm-to-fork" strategy, the EU actually wants to lead the way worldwide and halve use by 2030. But now it looks like an outright false start.

Abuses in animal husbandry must not be compensated for by antibiotics. This is what the EU Veterinary Medicinal Products Regulation (EU2019/6), which came into force at the beginning of the year, states. In practice, however, antibiotics are still used as a preventive measure for the entire flock, especially in turkey and chicken fattening. The active ingredient colistin, which is used in human medicine as a reserve antibiotic, is particularly controversial. Only Denmark and the Netherlands have managed to reduce its use (see overview).

After the EU Veterinary Medicines Regulation came into force, the EU Commission did present a list to ban certain antibiotics. However, the list only includes active substances that hardly play a role in animal husbandry any more. The substance groups of fluoroquinolones, cephalosporins and colistin, which are important for human medicine, are to be allowed to continue to be used in the EU. The World Health Organization (WHO), on the other hand, advises that the three substance groups should be reserved for human use because of increasing antibiotic resistance. Worldwide, 1.2 million people die each year from multi-resistant germs against which there are no longer any effective drugs. Despite this, the EU Commission disregards the advice of the WHO and follows the assessment of its own European Medicines Agency (EMA). The latter concludes that fluoroquinolones, cephalosporins and colistin are indispensable in animal husbandry.
At the beginning of April, the EU member states debated the Commission's proposal. By a large majority, they agreed with the Brussels authority. Only Germany and two other EU member states were at least in favor of a ban on colistin. However, they all want to retain fluoroquinolones and cephalosporins in veterinary medicine. These two groups of active ingredients are occasionally indispensable in livestock farming, but especially for pets, explained Prof. Markus Schick from the German Federal Ministry of Agriculture at an event organized by Deutsche Umwelthilfe. Schick assumes that the banned list will be extended over time. The reduction of antibiotic use must go through better husbandry and smaller barn units, Schick elaborated. But this would require financial support for farmers and "staying power."

Green MEP Martin Häusling, on the other hand, accused the EU Commission of a "belly landing". EU Health Commissioner Stella Kyriakides has fallen far short of her announcements, he criticizes, and calls for a list of banned substances in accordance with WHO guidelines. He is considering a lawsuit against the EU Commission, Häusling announced at the video conference of Deutsche Umwelthilfe. After all, he said, the Brussels authority had violated principles of the EU Veterinary Medicines Regulation, according to which abuses in husbandry may not be compensated for by antibiotics. For Häusling, antibiotics in the feed for all animals in the barn are a clear indication of routine administration to compensate for deficiencies in breeding and husbandry.

Veterinarians insist on use in pets

Veterinarians, in particular, warn that bans could endanger the health of dogs, cats and other favorites of man. Häusling nevertheless believes an agreement with the pet veterinarians is possible and would like to continue to allow individual animal treatment with the controversial reserve antibiotics. The Environment Committee of the European Parliament has indeed opposed the Commission proposal across all political groups. But the Parliament, unlike the EU member states, has no decision-making power. It is likely that the Brussels authority will push through its proposal for a banned list.

In the German finishing industry, there is no resistance to the antibiotic classification proposals being discussed in Brussels. The Central Association of the German Poultry Industry (ZDG) has signaled its support for the draft: "The selection made by the EU is scientifically comprehensible and technically well-founded," praises Dr. Ann-Kathrin Stoldt, who is responsible for animal health at the ZDG. The association does not see any problems in implementation. However, the situation would be quite different if the critics of the current draft were to prevail. These call for further active ingredients to be banned in veterinary medicine. Colistin is considered indispensable in poultry farming, at least for the time being. The association points to years of efforts to reduce the use of colistin, which is used primarily in the treatment of bacterial intestinal diseases.

However, the active ingredient is under particular scrutiny because in 2015 a mechanism was discovered by which bacteria can pass on the colistin resistance trait to other bacteria. In response, the ZDG had presented a concept for a possible elimination of colistin. "If we want to completely abandon the use of colistin in chicken and turkey farming, it will require a considerable effort on the part of the industry," Stoldt emphasized. For this reason, he says, the government is called upon to clear the way for alternatives, for example. These include bacteriophages, which are viruses that fight against the multiplication of their host bacteria. Another approach is offered by "competitive exclusion" (CE) cultures, which colonize poultry intestinal flora, making it much more difficult for them to colonize with undesirable pathogens and resistant germs. "In terms of animal welfare, from a veterinary point of view, there is an urgent need for such alternative treatment methods to prevent unnecessary animal suffering," the veterinarian notes. In particular with the laying hen and turkey attitude one is dependent on it.

With the Federal association of the practicing veterinary surgeons one does not want to express oneself at present to the Brussels plans and wait only for the resolution. In August of last year, the association launched a broad-based campaign calling for the therapeutic options in veterinary medicine not to be restricted too much, and has apparently found a sympathetic ear in Brussels.