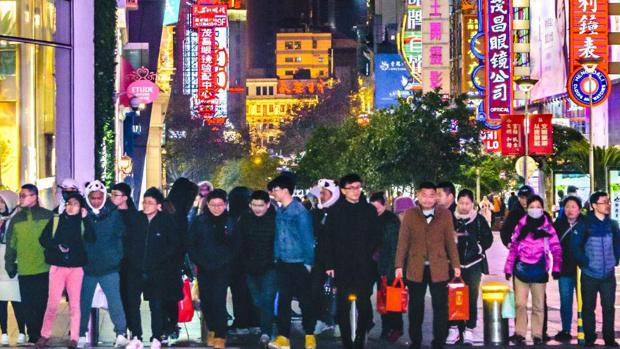 IMAGO / Zoonar
As here in Shanghai, the purchasing power of consumers is increasing throughout China. This also leads to higher demand for beef, which has to be met by imports.

The appetite for steaks & co. in the People's Republic is increasing and cannot be met from domestic production. At the same time, production in the USA is falling and the EU is losing ground.


In recent years, the People's Republic of China has become by far the world's largest importer of beef; the steadily growing demand there cannot be met by domestic supply. In 2021, the People's Republic's high import demand, together with the rather limited global supply of beef, contributed to a significant increase in prices in many parts of the world; cattle farmers in the European Union and Germany also enjoyed record prices.

In its latest forecast, the U.S. Department of Agriculture (USDA) expects Chinese imports to increase by a further 300,000 tons, or a good ten percent, to a new record of 3.25 million tons in the current year, following growth of six percent last year. The reason is that the increase in production expected for the People's Republic in 2022 of around 90,000 t to 6.92 million t of beef will remain well below the estimated increase in demand of 390,000 t to 10.15 million t.

However, a major uncertainty for market development in China, as well as worldwide, is the further course of the Corona pandemic. The current zero-covid strategy of the government in Beijing leads to strict lockdown measures and the sealing off of entire cities with millions of inhabitants or important ports even at the lowest infection figures, which can curtail beef consumption and imports. Politics also plays an increasingly important role in agricultural imports.

Criticism of China, for example, has led to prohibitive import tariffs on Australian wine and barley; many beef suppliers "Down Under" have been denied market access because of alleged hygiene violations. China's main beef supplier, Brazil, was also affected in 2021 when exports to the People's Republic came to a halt following two cases of atypical bovine spongiform encephalopathy (BSE). Brazilian exports and prices then collapsed, and it was not until mid-December that news came that China would reopen its market.

Brazil is expected to be one of the main beneficiaries of China's expected higher import demand for beef in 2022, following the re-granting of market access. After a temporary decline in 2021 in what is usually a steady increase in beef production, USDA expects the South American country to see a significant increase in production of 425,000 tons, or 4.6 percent, to 9.75 million tons this year. Although a smaller portion of this is likely to be used for domestic consumption, which is growing again, the bulk may be sold to other countries.

U.S. experts expect Brazilian beef exports to grow by 360,000 t, or 15.5 percent, to 2.68 million t in 2022. This should also be helped by the fact that the cattle herd at the beginning of the year was a good eleven million head larger than at the start of 2021, at around 264 million head. Not only China, which still accounted for 58 percent of Brazilian beef exports last August, but also Russia could once again become a more important export destination, as the government there has announced a tariff exemption for the import of 200,000 t of beef in 2022.

Declining production in the USA

Another candidate for large-scale beef exports to the People's Republic is the United States. Already last year, shipments there "exploded" due to an agreed improved market access under the economic and trade agreement between the two countries. From January to November 2021, U.S. beef exports to the People's Republic increased more than fourfold to 172,250 metric tons compared to the same period last year, which was weak, however; export revenues totaled the equivalent of €1.25 billion.

A problem for the USA, however, could be the recent reduction in cattle herds and the slaughter of many cows. Domestic beef production is expected to fall by around 350,000 tons, or nearly three percent, to 12.38 million tons compared to 2021, according to USDA estimates. Rabobank also recently projected U.S. production to be 2.5 percent lower. This is likely to reduce export supply; the US analysts expect exports to fall by 84,000 t or a good five percent to 1.48 million t in 2022.

Australia, on the other hand, is likely to be more strongly represented on the market again. The increase in cattle herds there is expected to result in an eleven percent rise in beef production to around 2.12 million tons in the current year; exports could also increase by a good eleven percent to 1.47 million tons.

The European Union's importance in the concert of the world's leading beef producers has diminished in recent years; in 2022, China could displace the Europeans from third place among the world's most important producers. Data on cattle numbers at the end of 2021 are not yet available, but it is likely that fewer animals were again raised in the Community. Both the USDA and the Brussels Commission expect EU beef production to fall by up to one percent in 2022, to about 6.8 million tons.

Slight losses, also due to increased prices, are expected for consumption. However, these are expected to be limited by the possible elimination of Corona restrictions in out-of-home catering. With exports virtually unchanged at 690,000 tons, USDA expects beef imports for the EU to pick up after the dip in 2021; they are expected to increase by about five percent to 320,000 tons. The Commission's fall forecast also assumes a more significant increase in imports.

In principle, the beef market is likely to remain rather tightly supplied in 2022, according to analysts, not only in the EU but also worldwide, so that prices should continue to be at an above-average level. However, this is also necessary for producers due to higher production costs. AgE

The text first appeared on fleischwirtschaft.de