Risk assessment of the maize harvest in Germany 2020

Agriculture is an uncertain business that depends on many external factors, especially the weather. The weather not only influences the growth of plants. Particularly at critical times in the development of the plant, weather conditions explain to a large extent the fungal infestation and consequently the risk of mycotoxins. No wonder that the first analysis results of the wheat and barley harvest are eagerly awaited. The maize harvest is now just around the corner. The Biomin® Mycotoxin Prediction Tool has been developed to assess the risk of mycotoxin contamination in advance and to be able to react to it. It was created in many years of research in cooperation with universities. It combines global hourly weather data and analyses the likely effects of mycotoxin contamination on plant and fungal growth, mycotoxin production and plant-fungal interactions. The comprehensive data set on mycotoxin occurrence worldwide, the Biomin® Mycotoxin Survey, allows these models to be validated and improved. A key variable is weather conditions. The Mycotoxin Prediction Tool is therefore based on hourly weather data from over 61,000 stations around the globe. Maize - like other cereals - can be attacked by Fusarium fungi, which can cause ear and stem rot in maize. This infection can occur during the entire growth of the maize plant, which is favoured by plant injuries or insects. However, the most decisive time window is during silk. This is the time of flowering, when the female stigma threads become visible (figure 1). 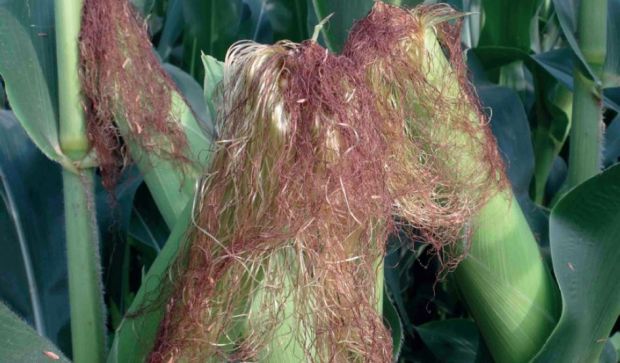 These filaments can be used for infection with Fusarium fungi. The spores reach the maize kernels. In combination with a few hours of rain or high humidity, these spores can develop. Even after pollination of the stigma threads and the beginning of the development of the young corn cob, an infection via the silk ox is possible. At a later stage, warmer temperatures promote the growth of the fungus and rainfall shortly before harvest time allows the production of more mycotoxins, as the moisture content of the grains remains higher. The silk season in Europe takes place mainly in July, which this year was generally drier than usual. However, moderate rainfall occurred in early August in Western and Central Europe, in Germany especially in the South. In general, according to the German Weather Service, August in Germany was rather humid and on average very warm. Rainfall in August could promote infection in maize plants in the late silk season. Deoxynivalenol (DON), one of the most important mycotoxins in Central and Northern Europe, can be produced by some Fusarium fungi. The risk that the concentration of DON in maize harvested exceeds a level that is harmful to animals is high in Germany (Figure 2a).

Biomin
Figure 2: The maps show the risk in different parts of Germany that maize from the forthcoming harvest is contaminated with deoxynivalenol (DON) (Fig 2a), zearalenone (ZEN) (Fig 2b), fumonisins (FUM) (2c) or aflatoxins (Afla) (2d). High risk e.g. 95% is red: here probably 95% of the maize is contaminated with a level harmful to animals.

The whole of Germany indicates a high risk level of 95%, which means that probably 95% of the maize crop has a concentration of DON that could harm the animal. The risk for the mycoestrogen zearalenone (ZEN), which is also produced by some Fusarium fungi, is lower but still relatively high at 57% (Figure 2b). This risk means that probably more than half of the maize harvest in Germany will be contaminated with ZEN that could harm the animal. The risk of harvesting ZEN is also increased by the fact that maize is harvested in autumn and ZEN is increasingly produced at cooler temperatures. The risk of maize harvests being contaminated with fumonisins, also Fusarium toxins, is generally moderate and only slightly increased in North-East Germany (Figure 2c). The risk of maize being contaminated by aflatoxins during growth in the field is also low to moderate. Aflatoxins are produced by fungi of the species Aspergillus and are generally regarded in Europe more as a problem of grain storage.