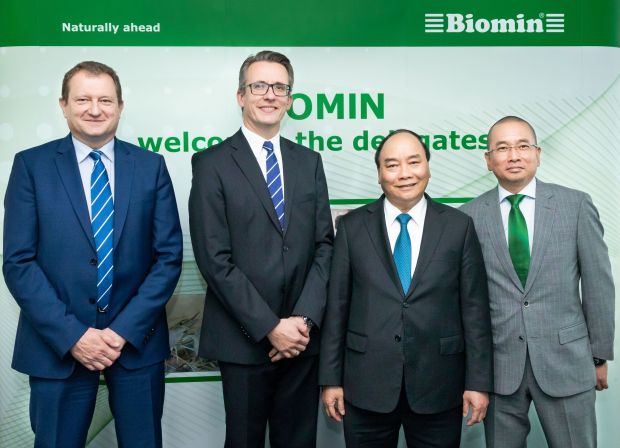 
On Tuesday October 16, 2018 the internationally operating ERBER Group welcomed a delegation from Vietnam at the BIOMIN Research Center Tulln. The delegation was led by Vietnam’s Prime Minister S.E. Nguyen Xuan Phuc, who came to visit BIOMIN together with several members of the Vietnamese government and high-ranking members of a trade delegation.
ERBER Group’s Executive Board Directors Heinz Flatnitzer and Rudolf Stelzhammer welcomed the Vietnamese delegation at the BIOMIN Research Center in Tulln for bilateral business talks. ERBER Group has been operating in Vietnam since 1995. Today, the South Asian region is one of ERBER AG’s biggest future markets.
Heinz Flatnitzer, Director of the Executive Board of ERBER AG: “ERBER Group sees itself as an expert organization and global market leader in its core competence of mycotoxin risk management – sustainable and forward-thinking. Our international focus on Asia, for instance, and especially on Vietnam, as well as our own research and development are important elements of our success and have been contributing to our steady growth for more than 30 years. ERBER Group currently operates in 142 countries and employs approximately 1,500 people worldwide – about 500 of them here in Austria and 80 in Vietnam.”
Rudolf Stelzhammer, Director of the Executive Board of ERBER AG, is happy about the visit from this high-ranking delegation and refers to the wonderful long-term development, especially in the Asiatic region: “ERBER AG’s sales, together with its divisions BIOMIN, ROMER LABS, SANPHAR and EFB, reached a record of 327 million euros in our business year 2017 – the long-term average of our successful growth is 16% p.a. Vietnam’s contribution to ERBER AG’s overall turnover of the past years has especially increased significantly. This is also based on the good framework conditions in this area: For many years the Socialist Republic of Vietnam has been one of the most dynamic countries in Southeast Asia. The growth rates of past years have always been over 6%; last year we had a growth rate of 6.7%, which was more than the governmental goal.”
Phuong Nguyen Quang, Managing Director Vietnam, BIOMIN: “BIOMIN Vietnam Company Limited was founded as early as 1995 in Hanoi. Today, BIOMIN has two state-of-the-art feeding production sites in the north and in the south of the country, and also operates an agricultural aquaculture research center and a diagnostic laboratory for animal health at Nong Lam University in Ho Chi Minh City. BIOMIN’s goal in Vietnam is to expand its pioneer position regarding the development of antibiotic-free feed additives for aquacultures, cattle, swine and poultry, and furthermore to develop its research efforts in biotechnological areas for vaccines and enzymes.”