Combination of the proven and the new 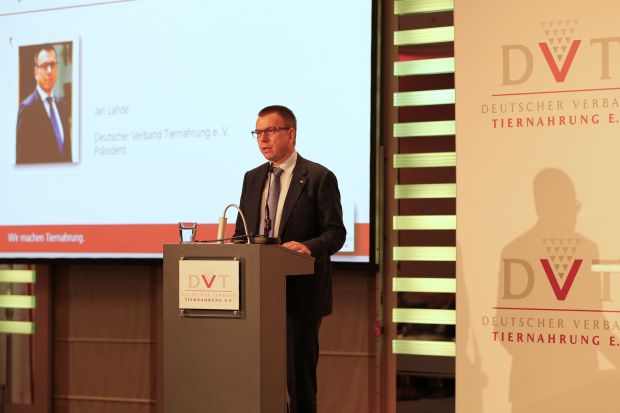 
Open markets and unrestricted access to raw materials are very important to the feed industry. This is one of the key messages of Jan Lahde, President of the German Association of Feed e. V. (DVT) in his opening speech to the association's annual conference in Berlin at the end of September: "Only with free access to globally available resources can we realize sustainable animal nutrition - also in terms of climate protection. If we discuss geographical origin and refrain from importing individual raw materials from the climatically favored regions, this is a luxury debate," Lahde clarifies.
In the context of the current debate on climate change, the DVT president calls for a healthy balance between environmental and economic policy, which will secure the domestic production of animal feed. Falling meat consumption in Germany is mistaken over the fact that global meat production continues to rise in the long term according to the OECD. Lahde: ​​"We have a very high standard in the German finishing industry and put it at risk with exaggerated social and environmental ideas." He rejected the demands for a blanket import ban on soy and meat abstinence. The feed industry is committed to sustainability and has already made a significant contribution to improving the situation through the globally valid FEFAC guidelines for sustainably certified soya. According to these guidelines, soya may only be used in compound feed from those areas  that were not cleared after 2008, according to the soy moratorium.
A legally secure environment for feed production and raw materials also includes the use of feed components produced with the help of the new breeding technologies. "We see clear advantages in the new breeding methods because they contribute to sustainability and thus to climate protection," says Lahde. "For us, the majority of such plants treated by new breeding methods should get in lane legally like the crops, which have emerged by conventional methods." The judgment of the European Court on this issue in the summer of 2018 has prompted the DVT, together with other business associations for an adjustment to promote the genetic engineering regulations. Since it is currently not possible to identify the reason for the mutation and this precludes traceability and labeling, Lahde demands: "We need legal certainty for the import of raw materials produced abroad using these techniques, which are not classified as genetically modified. In order not to jeopardize our supply markets, the provisions on agrarian commodities in different regions of the world must be compatible. Because in trade and in logistics with bulk goods such as soy, corn, rape and wheat, the goods are already brought together in the countries of origin. "There is an urgent need for political action, said the DVT president.
Whether organic, GMO-free, regional or conventional - the changing consumer demand in Germany leads to diversification of the food supply and thus also of the feed assortment. The wishes tend to increase the cost of production for animal products. DVT President Jan Lahde emphasized: "The most important thing in all the discussions is and remains that feed and its components must be suitable, marketable and, above all, safe for the species. Because feed safety comes first." Manufacturers of feed, thanks to their know-how and the great adaptability of their feed mixtures, can ensure that the animals are fed with high-quality feed - even in difficult years, when the basic feed supply due to drought and thus a poorer harvest is not optimal.