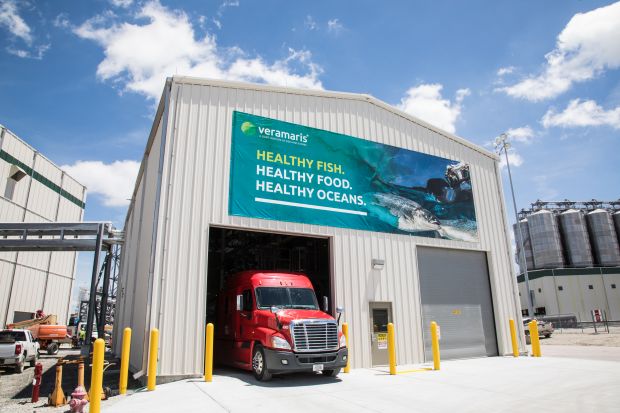 
After just two years of construction, a joint venture between Evonik and the Dutch company DSM in the US is commissioning a unique production facility that enables the fermentative production of special omega-3 fatty acids from natural marine algae for salmon farming.

The two parent companies of the 50:50 joint venture Veramaris have invested an equal amount of $ 200 million in the construction of the Blair, Nebraska facility. The algae oil produced there can initially cover around 15 percent of the annual global salmon farming industry's demand for the two omega-3 fatty acids EPA and DHA in a sustainable way. The process developed by Evonik and DSM for the first time enables the production of EPA and DHA for the nutrition of salmon without the use of fish oil from wild fish.

"With Veramaris, we have combined the expertise of two strong partners to contribute in an innovative way to the healthy nutrition of the world's population, which is not at the expense of life in our oceans," says Christian Kullmann, CEO of Evonik. Feike Sijbesma, CEO of DSM, emphasizes: "I am very pleased that we have reached a milestone together with Evonik that can turn the corner: Through Veramaris we are able to reduce the dependence of the aquaculture industry on the limited resource of fish oil to reduce essential omega-3 fatty acids. This fits in perfectly with our strategy of facing the big global challenges while creating economic, environmental and social value for all our stakeholders."

With more than 40 production and R & D locations, North America is a strategically important region for Evonik with high growth potential. In addition to its regional significance, Evonik is also addressing one of the Group's four strategic growth cores: Animal Nutrition. In addition, the company focuses its investments on smart materials, specialty additives and health & care.

With Veramaris, the Animal Nutrition business unit takes a significant step forward on its way to becoming a holistic and innovative system provider for healthy animal nutrition and sustainable livestock farming. The joint venture not only complements the portfolio of the business area but, together with its activities in the field of Precision Livestock Farming, forms the main pillars in the further development of the Animal Nutrition division.

The Veramaris algae oil production is based on the natural algae strain Schizochytrium, which DSM has partnered with Evonik. The joint strain development to commercial production maturity and joint process development laid the foundations for the new production plant, for the construction of which Blair Evonik has assumed responsibility. Evonik has been producing fermentative Biolys®, the amino acid L-lysine, for many years. The production complex uses synergy effects in terms of infrastructure, technology and personnel. Added to this is the know-how acquired over decades in the large-scale fermentation that Evonik uses in Blair.

Approximately 16 million tonnes of wild fish are caught each year for the production of fishmeal and fish oil, which are used as feed ingredients in aquaculture. By adding amino acids from Evonik and modern feeding concepts, the animal nutrition industry has already succeeded in significantly reducing the amount of fishmeal in fish feed. Veramaris algae oil now also makes it possible to reduce the amount of fish oil without reducing the omega-3 fatty acid content in the fish.

Veramaris algae oil not only contributes to improving the sustainability of aquaculture, but also supports healthy human nutrition. The omega-3 fatty acids EPA and DHA are essential fatty acids that humans can only absorb through their diet. They contribute to maintaining the health of the brain, heart and eyes.