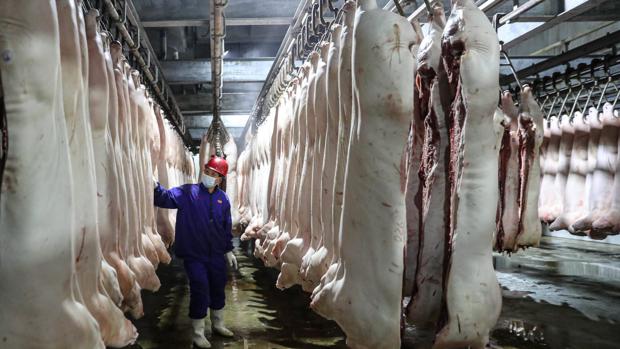 IMAGO / VCG
The USDA expects 645 million pigs to be slaughtered in China this year.


The U.S. Department of Agriculture (USDA) has sharply raised its forecast for pork production in China for 2022. In the market outlook for the global meat market published yesterday, the U.S. experts assume that around 645 million animals will be slaughtered there in the current year; in October, only 570 million slaughterings had been assumed. The USDA now put China's projected pork production for 2022 at 49.5 million tons, up 5.8 million tons or 13% from the October forecast. If the estimate proves to be correct, pig production in the People's Republic would grow for the second year in a row following the heavy losses caused by African swine fever (ASF).

However, compared with the previous year, the growth rates expected by the USDA for Chinese pig production are no longer as significant. Slaughter volume is expected to increase by 15 million head, or 2.4%, and pork production by 650,000 tons, or 1.3%, compared to previous estimates for 2021. This would exceed pre-ASP outbreak levels. According to Washington analysts, the higher production will reduce the People's Republic's import needs for pork. Imports are expected to reach 4.2 million t; that would be 200,000 t, or 5%, less than in 2021, but still an above-average amount by longer-term standards.

Smaller producers likely to give up

According to the USDA, pig prices in China are currently far below the record levels of recent years, but they have firmed up since their low point in the fall. With production costs also rising in the People's Republic, smaller producers are likely to cut back or abandon hog production, but large industrial farms are trying to reduce their fixed cost burden through modernization and expansion. In addition, government support for the large farms is providing some increase in production at these companies, he said. The Chinese breeding sow herd has been in slight decline again recently, according to USDA, but a higher herd is expected to start in 2022. As less efficient sows have been weeded out, the U.S. Department of Agriculture says higher productivity and adequate live supply can be expected, especially in the first half of the year. AgE