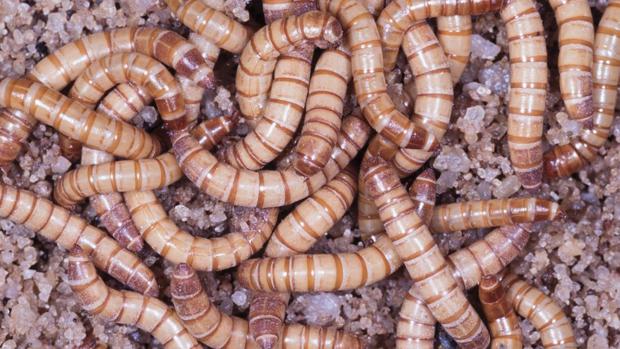 imago/Ardea
The larvae of mealworms & co are voracious and rich in protein. They can recycle almost all organic residues.


The Paris-based startup will supply its black soldier fly proteins to ADM's pet food division to produce "high-quality nutritional products" with a "significantly lower carbon footprint and land requirements" than traditional animal proteins, the two companies said in a statement.

The agreement builds on an existing collaboration under which InnovaFeed announced it will build the "world's largest insect farm" next to ADM's corn processing facility in Decatur, Illinois, in 2020. The plant will produce 60,000 tons of protein and 20,000 tons of oils for animal feed and livestock feed, as well as 400,000 tons of fertilizer, Reuters reports.

InnovaFeed already cooperates with agribusiness group Cargill in aquaculture and pig feed, as well as with ingredient manufacturer Barentz and farm input company Hello Nature, it said. According to AgFunder, AFN's parent company, InnovaFeed was the third largest funded startup in the novel farming systems category in 2020, receiving US$166 million from investors including Creadev and Temasek.

Insect production with a lot of potential

Insect species such as the black soldier fly, mealworms and crickets can produce edible protein much more efficiently than conventional livestock such as cattle, pigs and sheep. Insect farms require much less land than, say, cattle farms or a pig farm. They also tend to be hardy in a wider range of environments: they can be farmed in a variety of conditions - such as indoor environments that don't need to have special characteristics.

They can be fed organic waste, which allows for recirculating systems. They also require much less water. Depending on the species, the insects can be used to obtain various oils, chemicals and other industrial materials, in addition to proteins. Furthermore, they can be processed into powders, for example, which offers food or feed manufacturers additional flexibility in production. In addition, their excreta can be used as fertilizer.

French startup Ÿnsect, which grows mealworms in technology-enabled facilities, has yet to form any high-profile partnerships - although it did partner with U.S. pet food brand Pure Simple True late last year to launch its first commercial product. Ÿnsect took first place in the Novel Farming Systems category in 2020, raising a total of $222 million.

In the UK, Better Origin is partnering with supermarket chain Morrisons to place its "mini-farms" of black soldier flies on their egg farms as a sustainable source of chicken feed. The flies are fed with waste from Morrisons stores.

The Dutch company has raised the money for this - around €50 million - from investors. On an industrial scale, protein-rich animal feed is to be produced from food waste.

The regulatory environment for insect proteins is still immature, although it is rapidly evolving.

EU: The EU gave the green light for insects in pig and poultry feed. It also recently decided to add crickets, yellow mealworms and grasshoppers to the list of "novel foods" suitable for human consumption.

USA: Last year, the USA approved the use of black soldier flies in dog food.

Market opportunities are opening up not only in the food segment or feed for livestock, but also in the pet food segment, where demand for sustainable products is growing. According to Jorge Martinez, head of pet food at ADM, pet food represents a market opportunity worth US$100 billion, growing at 4.5 percent each year. By some calculations, one-fifth of the meat produced in conventional agriculture is fed to our pets, while one-fourth of the environmental impact of animal agriculture is attributable to pet food. Thus, like the production of meat for human consumption, the pet market is a significant contributor to greenhouse gas emissions and other negative impacts of animal agriculture, such as high land and water use, water runoff, and ecosystem degradation. As with meat for human consumers, startups and entrepreneurs are turning to new products and processes, such as plant-based proteins, fermentation, cell culture and insect farming, to provide more sustainable alternatives.

"Pet owners are increasingly demanding the same kind of sustainable, healthy products they eat themselves, and we are proud to partner with InnovaFeed to further enhance our ability to meet those needs," Martinez said in a press release.