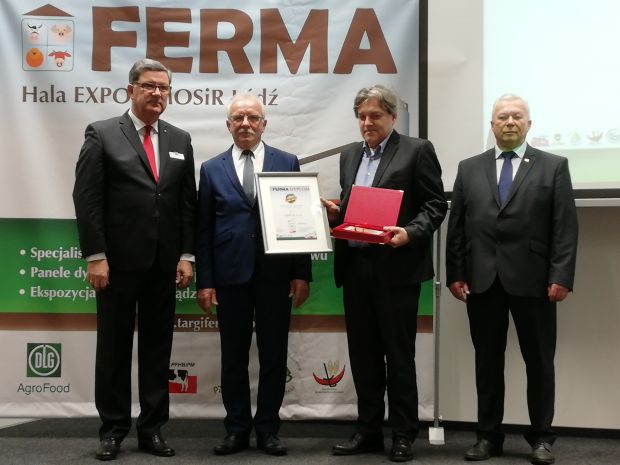 Leiber
Dr. Andrzej Sobieraj (2nd on the right) accepting the prize in Lodz together with the members of the commission.

This year's visit to the FERMA trade fair was crowned with shining success for Leiber GmbH and its Polish daughter company - Leiber Sp. z. o.o. based in Krosniewice.
This year, the animal feed department with its brewer's yeast range was, once again, represented at the fair in Lodz. FERMA is regarded as the international trade fair and platform for producers and breeders of livestock, pork and poultry in Poland. A commission consisting of members of the Polish Chamber of Agriculture, scientists and a representative of the fair organisation, awarded medals to two of Leiber brewer's yeast products.

The new product Leiber YeaFi® AB, a mixed product consisting of brewer's yeast compounded with apple pomace and beet pulp, was awarded a prize as an “innovation” on account of its high content of active fibres for the support of the digestion by the animals. During the development of the product, special attention was given by Leiber to the grain-free composition, as the animal feed industry and animal owners have increasingly demanded this in recent years.

The second product that was awarded the “gold medal” was Biolex® MB40, a specialist brewer's yeast product from the Leiber animal feed range. It consists of the cell walls of genuine brewer's yeast (Saccharomyces Cerevisiae), which are obtained during the production of soluble brewer's yeast extracts. Its high levels of beta-glucans and mannan-oligosaccharides, for example, actively support and relieve the immune system, and bind and inactivate pathogens and toxins in the gut.

Both Andrzej Sobieraj on behalf of the Polish subsidiary and the director of the business unit for animal nutrition, Nikolaus Jungbluth are delighted with the awards.