Soybean contains various non-nutritive compounds such as inositol phosphates, saponins, protease inhibitors, isoflavones, lectins, oligosaccharides and tannins, which reduce its nutritional value and hinder or inhibit the uptake of nutrients, producing adverse physiological and biochemical effects in animals when reaching certain concentration in the gut of the animals.

Protease inhibitors  block the catalytic activity of normal digestive enzymes, such as serine-proteases (trypsin and chymotrypsin) characteristic of the gastrointestinal tract of birds, by forming stable complexes. These protein inhibitors are generally called Trypsin Inhibitors (TI). High intake of these TI via the diet consequently causes pancreatic hypertrophy/hyperplasia as compensation of the organ to secret enough digestive enzymes in response to the higher demand. As a result of an increased loss of endogenous protease, the digestibility of feed proteins and amino acids (AA) in the intestinal tract is also decreased: it has been demonstrated that the more TI the soy source contains, the lower the apparent ileal amino acid digestibility (AIAAD). This affects the nitrogen balance and gut viscosity in the gut which leads to an increased intestinal inflammation and incidence of leaky gut, ultimately conducting to different digestive disorders such as subclinical necrotic enteritis. Therefore, if these TI are not handled accurately, growth and feed efficiency of the bird will be compromised . Therefore, TI analysis of any soybean source purchased can be considered as a reliable in vitro predictor of the in vivo efficacy of such soybean source.

Some of the antinutritional factors in soy are heat labile (Kunitz trypsin inhibitor, lectins, goitrogens), others though are quite heat stable (oligosaccharides and phytate). Therefore, heat treatment normally applied to soybean is generally considered as an effective approach to inactivate them, because it denaturates a substantial amount of them. However, this does not fully eliminate all: soybean Bowman Birk trypsin inhibitor, exhibits a considerable resistance to heat treatment.  In this regard, a recent Novus study looking into the distribution of TI content within more than 896 samples of different soy sources derived from various countries all over the world, showed a high variability, despite the treatment processes applied. In ranking, the EU  SBM samples collected, showed to have the third highest mean level of TI content after those from Latin America and Asia (resp. 3.29 mg/g, 3.543 mg/g and 3.462 mg/g). Even within the different countries in the EU, the ratio of samples with contents below 3mg/g or above 4mg/g differed strongly (Fig.1). 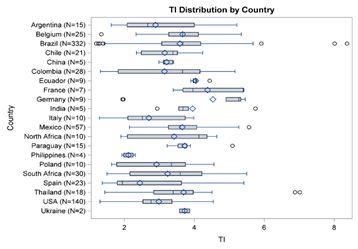 Novus
Fig.1 Distribution of trypsin Inhibitor content in different soybean meal products collected, by country.
It was estimated that 14% of US origin SBM contained more than 4 mg of TI/g.  Other sources of soy, such as full- fat extruded soybean (FFES), were much more variable even in TI content and due to these being generally higher than in SBM, pose a greater risk of a reduced AA digestibility (Fig.2). 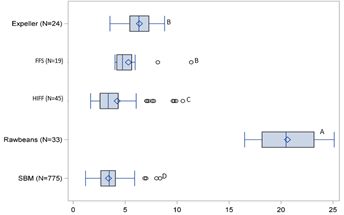 Considering variable levels of TI can remain in SBM, despite heat treatment, applying an efficient nutritional tool to reduce any residual TI in the intestinal tract, can be a valuable strategy to consider. CIBENZA® EP150 (Novus Int., Inc.) is a unique feed additive preparation containing a serine endoprotease with spores of its producing organism B. licheniformis (EU identification number 4d12). In vitro research done by the University of Sidney in Australia proved, when incubating purified Bowman-Birk and Kunitz factors, the 2 most common trypsin inhibitors in soy, with CIBENZA® EP150 for 2 hours at 37°C, both were destroyed at a 1:1 substrate to enzyme ratio. Other soy allergenic proteins, such as glycinin and β-conglycinin, could also strongly be hydrolyzed following the use of this additive. An in-vivo study published recently showed that when feeding broilers a diet in which 25% of the SBM was replaced by full fat extracted soybean (FFESB) with high TI content, CIBENZA® EP150 significantly minimized the impact on pancreas weight and AIAAD, allowing to achieve similar results as a corn SBM diet without FFESB6 (Fig.3,4). 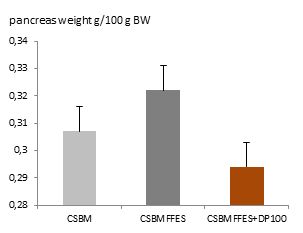 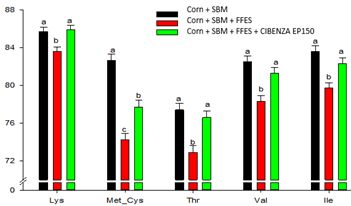 Novus
Fig.4 Even with a higher presence of TI following the addition of FFES, CIBENZA EP150 ensures similar AA compared to the corn SBM diet without FFES

In summary, the presence of antinutritional factors is one of the major aspects negatively affecting diet ingredients of commercial poultry and it represents a non-negligible challenge for final bird performance. With the use of CIBENZA® EP150 an optimal digestibility of dietary protein can be ensured, by improving the nutritional value of the fed soybean sources thanks to further degradation of their residual content in TI, and by complementing the endogenous proteases in the intestinal tract. This way more valuable nutrients will become available for the birds to grow at an excellent feed efficiency, also minimizing nitrogen excretion, and reducing the environmental footprint of production .