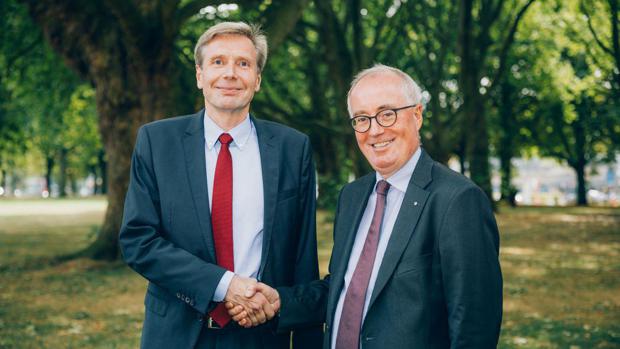 Rainer Schuler of BAT Agrar GmbH now heads the association as its new president. He was elected unanimously at the general meeting in Hamburg.


Together with Vice Presidents Thorsten Tiedemann of Getreide AG, Jaana Kleinschmit von Lengefeld of ADM Hamburg AG, Ute Becker-Keller of Rupp Landhandel GmbH and Bent Nissen of Hauptgenossenschaft Nord AG, Schuler will lead the new association "Der Agrarhandel" (DAH) into its first regular term of office. DAH was formed at the beginning of 2022 from the merger of the Bundesverband Agrarhandel (BVA) and the Verein der Getreidehändler der Hamburger Börse (VdG). It maintains offices in Hamburg and Berlin.

"We would like to thank our members for the trust they have placed in us. The broad portfolio of representatives from a wide range of professional fields in the agricultural trade, company sizes and locations will get us off to a good start," says Schuler. DAH Vice President Tiedemann added: "We would like to explicitly thank all members who held offices in our predecessor associations BVA and VdG, be it in the respective boards, committees, sections or other bodies. Thanks to this valuable technical work, we as DAH are on a good foundation."

Now the course has been set for the future work of the association, Schuler explained. The DAH team is very much looking forward to representing the member companies with a strong, united voice throughout Germany and internationally. In recent months, the association has already become more involved in political discussions and intensified its communication in the social media. In addition to dealing with current industry issues, the DAH offers its members individual legal advice and comprehensive specialist information.