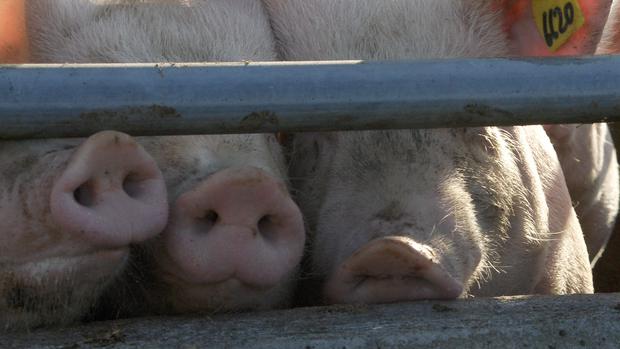 In a joint project, scientists want to investigate how pigs can be fed even more efficiently while excreting fewer nutrients. The researchers also have genetics in mind.


Ways to make pig fattening more nutrient-efficient will be explored over the next three years as part of the project "Genetic improvement of efficiency traits in pigs to reduce nutrient excretion" (EffiPig). As reported by the University of Bonn, which is in charge of the project, different breeding lines will be investigated using feeds with different levels of nutrient reduction. The aim is to identify animals with the lowest possible nutrient excretion. In addition to efficiency characteristics, animal welfare will also be considered, according to the university. Phosphorus is important for the bones and thus for the health of the locomotor system of the animals. Therefore, sufficient supply will also be taken into account. "Due to the changed framework conditions in agriculture, the efficiency of nutrient utilisation in pig production is gaining in importance," explained Dr Christine Große-Brinkhaus from the Bonn Institute of Animal Sciences.

According to her, the project also aims to counteract a possible shortage of feed. As a result of climate change, the risk of drought years with particularly negative effects on domestic protein feeds such as sunflower or rapeseed is increasing. The desired renunciation of the use of imported soy would thus be more difficult to implement. According to the University, the German government is funding the project through the Landwirtschaftliche Rentenbank with approximately €1.6 million. In addition to the animal scientists from Bonn, the Max Rubner Institute (MRI), the Bioeconomy Research Promotion Association and BHZP GmbH are also involved. AgE