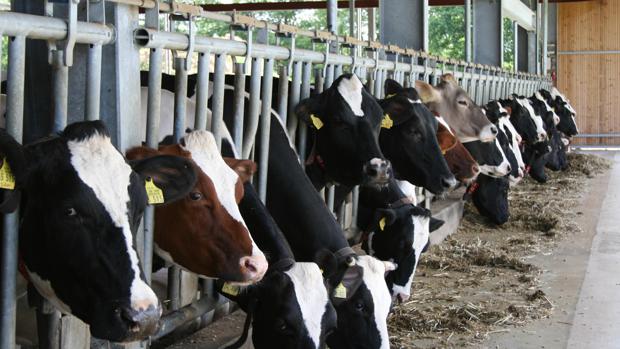 Low temperatures, air changes and good cleaning management are important for an optimal climate in the dairy barn. This also reduces ammonia emissions, as shown by recent results from the Bavarian State Research Center for Agriculture (LfL).


Ammonia emissions from livestock farming in Germany must be reduced by 29% by 2030 compared to 2005 levels, according to the "Ordinance on National Commitments to Reduce Emissions of Certain Air Pollutants." Current research results from the Bavarian State Research Center for Agriculture (LfL) show that in dairy cattle, good management and barn climate can contribute significantly to reducing these emissions. In the project, researchers studied outdoor climate stalls for dairy cattle, which offer the animals more space to move around, light and fresh air through additional exercise yards.

It was determined that between 8 kg and 15.5 kg of ammonia was released per animal per year from such dairy barns and between 2 kg and 6 kg from the exercise yards. According to the LfL, sophisticated methods were used to measure ammonia emissions from freely ventilated housing systems. Here, the property of gases to absorb near-infrared light of certain wavelengths played a role. Special laser measuring devices were used to determine the content of ammonia and carbon dioxide. As expected, it turned out that heavily soiled moist treads release particularly high levels of ammonia into the air. Compared with dry surfaces with a low level of soiling, these released three to three-and-a-half times the amount of ammonia in the tests.

In summer temperatures and with insufficient air exchange, the gas can accumulate in the barn and cause "thick air" there. A sufficiently shaded outdoor exercise yard, which the animals can reach directly from the barn, can then provide relief. This is used more frequently by the cows if it is equipped with an additional feeding table and cubicles. This does create some of the ammonia gas directly outside; however, it can be achieved that, with good management, not much more of it is released into the environment overall. In addition, according to LfL, ammonia emissions in the barn can be reduced by up to 30% with an optimal barn climate - including lower temperatures, adequate air changes and good cleaning management. AgE