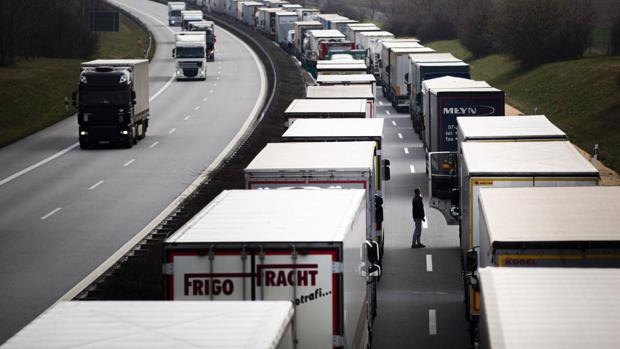 imago/Photothek
Export facilitation for Ukraine: Agricultural Trade is calling for prioritized truck clearance at EU borders, an increase in the total weight allowed for grain shipments from the current 40 tons to 44 tons in Germany, and to minimize phyto-sanitary certificate checks.

In order to secure food for humans and animals worldwide in the long term, technological progress must be used, demand the industry associations organized in the GrainClub. In the short term, solutions would have to be found for Ukrainian grain exports. The agricultural traders have submitted concrete proposals in an open letter to the responsible federal ministries.


The war in Ukraine has caused much turmoil in agricultural trade and on global agricultural markets. Since Ukraine is missing out as a major world market exporter, this gap must be compensated for by other origins, they said. "Open borders are necessary for this," explained Thorsten Tiedemann, second chairman of the industry association "Der Agrarhandel" yesterday during a press briefing of GrainClub in Berlin. No further trade barriers should be erected. Instead, varieties that have been bred with Crispr-Cas, for example, should be approved for import. Franz-Josef Holzenkamp, President of the German Raiffeisen Association (DRV) and GrainClub Chairman, also advocated free trade: "Free trade is an important prerequisite for the right to food." Agricultural products are not always available where they are needed, he said.

Coordinating body for Ukraine called for

Logistics is central to agricultural trade, said Rainer Schuler president of the industry association "Der Agrarhandel". For example, there were an estimated 15 to 20 million tons of grain stored in Ukraine that could not be transported because only trucks and trains were available. "There are jams back and forth." Traffic jams 20 to 30 km long at EU borders make handling difficult. He called for more support from politicians and the establishment of a national coordinating body. In an open letter to the Federal Ministers of Finance, Economics, Transport and Agriculture, the association submitted a number of concrete proposals on how logistical hurdles could be overcome in the short term.

Time-consuming checks of phyto- and sanitary certificates would have to be reduced to a minimum. Pre-sorting of trucks with prioritized clearance would also be useful. In addition, grain wagons should continue to be activated at short notice. Schuler also believes it would be sensible to increase the permissible total weight of grain transports from the current 40 t to 44 t in Germany. In this way, significantly more payload could be put on the road quickly and unbureaucratically. This is because the warehouses in Ukraine urgently need to be cleared for the new harvest. The use of silo bags or silo hoses would also be conceivable as an interim solution, according to Schuler.

With regard to the supply of fertilizers, the association president is concerned about the withdrawal of cheap Russian natural gas. In any case, he said, plants have already been shut down in Europe because they were unprofitable. This trend could continue with the switch to more expensive liquefied natural gas, causing the European fertilizer industry to "collapse." Globally, he said, availability with inputs such as fertilizers and crop protection products was not a problem. Only in the case of crop protection products did supply chain disruptions become noticeable, as many middle components are often produced in China.

Globally, agricultural traders are confident about the new harvest and the security of supply of agricultural products. The already tight grain and oilseed balance due to weather conditions - such as drought in Canada - has been exacerbated by the Ukraine situation, explains Jaana Kleinschmit von Lengefeld, president of the Association of the Oilseed Processing Industry in Germany (OVID). But this could be compensated by area expansions in other countries.

In the long term, however, the expansion of land is only possible to a limited extent in order to secure food globally, said Prof. Stephan von Cramon-Taubadel, Dean of the Faculty of Agricultural Sciences at the University of Göttingen. Global production growth has weakened and is now only 2.1%, he said. In his view, the future lies in the consistent use of technological progress. Only in this way could the goals of sustainability and productivity be improved.

This was also emphasized by DRV President Holzenkamp. "We have to focus on technical progress in order to combine both - i.e. productivity and sustainability." This requires openness in Germany and Europe to new technologies such as Crispr-Cas or precision farming, in order to reduce the application rates of farm inputs without loss of yield.