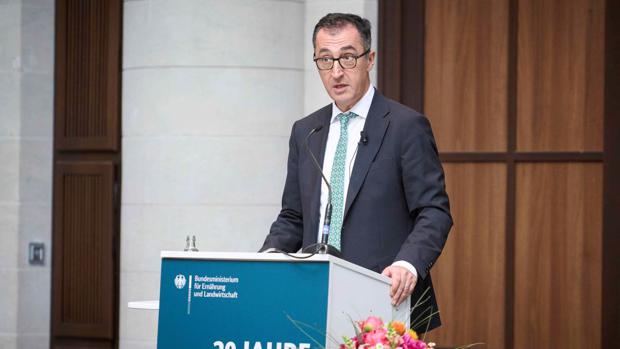 The German Federal Minister of Agriculture Cem Özdemir has announced that the Animal Welfare Livestock Ordinance will be supplemented. Specific minimum requirements for certain farm animals are still missing.


The aim is to create regulations for animal species for which no specific requirements have existed to date, such as dairy cows and fattening turkeys, Özdemir said at the ceremony "20 Years of the State Objective of Animal Protection in the Basic Law" in Berlin. In addition, he said, the aim is to change the fact that non-curative interventions are still common practice and not the exception.

The minister reiterated his goal of tackling the restructuring of animal husbandry in this legislative period. One important task, he said, was to "orient the development of livestock in a climate- and environment-friendly way and to re-orient it to the available land." Livestock numbers and land area must be compatible "so that animal husbandry remains compatible with the protection of the environment, climate and biodiversity," said the Green politician. The motto is "fewer animals are better".

An important prerequisite for this is "to make the performance of farmers for more animal welfare also visible, as we will do with our mandatory animal husbandry labeling," explained the department head. This is one of the building blocks of the overall project of "future-proof animal husbandry," he said, as is an adjustment of the building code.

The minister reiterated the key role of sufficient state funding. This should not be limited to investment funding, but should also include compensation for the additional running costs. It was clear that the costs could not be recovered on the market. Now that financing has been discussed at length, the task is to reach decisions. "Anyone who says no to financing is saying no to animal husbandry in Germany," said Özdemir, addressing the coalition partner FDP. Under no circumstances should farmers be put off any longer.

The minister stressed that the vast majority of livestock owners deal responsibly with animals and respect animal welfare regulations. Nevertheless, many people rejected widespread procedures and circumstances in agricultural animal husbandry. This must be taken into account, he said. Özdemir emphatically rejected demands by animal rights activists to dispense with the slaughter of animals and warned against exaggerated expectations of animal welfare. In this area, too, he said, progress would only be made "step by step."

The importance of national animal welfare monitoring was emphasized by Prof. Lars Schrader, head of the Friedrich-Loeffler-Institut (FLI) for animal welfare and animal husbandry. Without systematic indicator-based monitoring, there is a lack of both information on the state of animal welfare in Germany and the ability to measure progress and evaluate policy measures, Schrader explained in Berlin. The scientist described artificial intelligence methods as helpful in automating and expanding the use of slaughter findings data, as practiced by QS Qualität und Sicherheit GmbH, for example.

Schrader drew a positive balance of the amendment to the Basic Law in mid-2002, saying that a great deal had changed, especially in the minds of livestock farmers. Their willingness to switch to more animal-friendly methods has increased enormously. In order to take steps in this direction, however, a viable economic perspective is needed for the farms, Schrader said. Schrader, a member of the Borchert Commission, reiterated the Commission's call for a reliable financial concept for the conversion of animal husbandry and called on politicians to offer acceptable solutions to obvious conflicts of interest, for example between open stables and environmental protection. Science could make important contributions to this. AgE