Association structures make it difficult for women to get involved 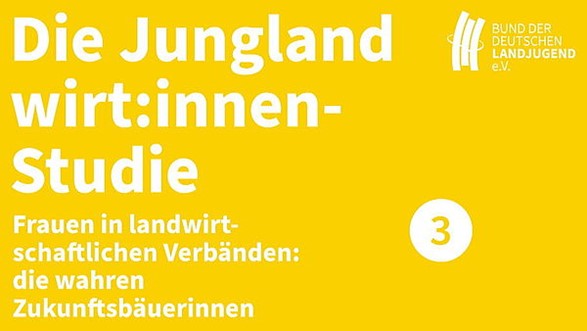 Women are not actively excluded when it comes to honorary agricultural office. However, there are structures that indirectly or directly impede women's access. This is the conclusion of the third part of the study on young farmers.


The study, which was launched by the Federation of German Rural Youth (BDL) in cooperation with the market research company Produkt+Markt and with the support of Landwirtschaftliche Rentenbank, not only shows the potential of women's voluntary work in agricultural associations, but also how it can be activated, emphasized BDL Vice President Stefan Schmidt at the presentation of the publication.

According to Schmidt, women know, for example, very well about details such as goals and structures of agricultural interest groups, but get significantly less contact with them than men. Almost a third of the women surveyed are not members of any agricultural organization; the remaining two thirds are in agricultural associations, but just under half of them do not get involved there. However, the potential is enormous, according to Schmidt: "Under ideal conditions, almost all of the women surveyed would be willing to become members of an interest group and to take on responsibility and become actively involved there." With the men the potential is likewise present, but clearly smaller.

According to the words of the Federal Chairwoman Theresa Schmidt, the BDL wants to improve the possibilities and opportunities for young women, but not pillory either men or the agricultural interest associations: "We are concerned with an association culture and structure that does equal justice to the various interests and needs."

If the needs of women moved more into the focus, above all the federations profit - in addition, the men, so the Federal chairwoman. Because more identification with agricultural associations would ultimately also mean more assertiveness and more acceptance. For example, almost a third of the women would be motivated to participate in the association by the opportunity to work in various project groups. AgE/jo