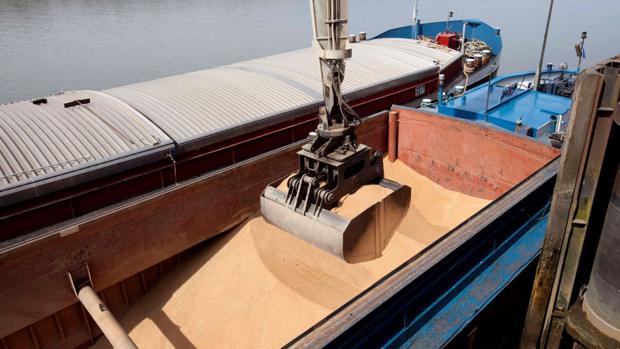 IMAGO / Andia
However, exports from Ukraine via the Danube cannot compensate for the capacity of the Black Sea ports.

Ukrainian inland ports near the Danube significantly increased their grain handling in May; however, this is not an adequate substitute for the Black Sea ports, which continue to be blocked by Russia. In order to secure further land transport routes, the EU, Ukraine and Moldova are strengthening their cooperation.


According to Dmitry Barinov, vice-director of the state-owned Ports of Ukraine, grain exports through Ukraine's inland ports near the Danube reached about 1.3 million tons in May, 500,000 tons higher than the amount shipped in April.

As Barinov told the Ukrinform news service, in contrast to rail, inland freighters move mainly agricultural products. Nevertheless, he sees little potential for further increases here. In June, there were at most 1.5 million tons of grain exports, the logistics expert said. Limiting factors, he says, are limited shipping space and lack of loading capacity. In the medium and long term, however, exports could be expanded in this way by building new, efficient loading and unloading facilities, Barinov said. This, however, would require appropriate financing.

Meanwhile, Ukraine and Moldova have agreed to create new land transit routes. An agreement signed this week by President Volodymyr Selenskyj and his Moldovan counterpart Maya Sandu provides, among other things, for simplifications in bilateral border traffic and the reopening of previously closed railroad lines between the two countries. Here, too, the aim is to ensure alternative goods traffic in the direction of Western Europe.

The EU is also strengthening cooperation with Ukraine and Moldova. To this end, the Commissioner for Transport, Adina Vălean , together with the Ukrainian and Moldovan Ministers for Infrastructure, Oleksandr Kubrakov and Andrei Spînu, yesterday signed an agreement on road freight transport as part of the "Connecting Europe Days" in Lyon. According to the EU Commission, the agreement will facilitate freight transport between the EU, Ukraine and Moldova. For example, it will allow transport companies to cross and drive on each other's territory without needing a permit. In addition, the EU and Ukraine have signed an agreement on their infrastructure links. Among other things, this provides for the recognition of Ukrainian driver's licenses and certificates of competency. AgE