Giant cooperation for grain and feed industry by IDMA and VICTAM 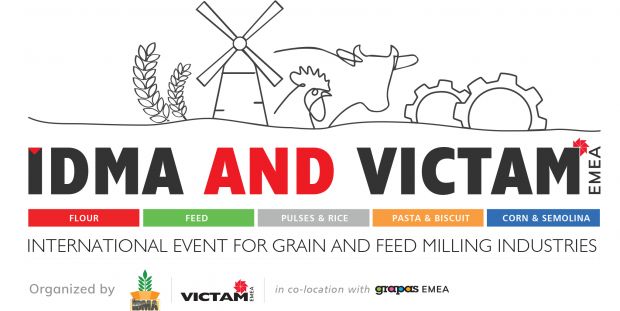 
Parantez International Fair and Victam International, the organizers of events for the grain and feed milling sectors, combined their success and expertise for IDMA Exhibition. The two companies which set out to organize the biggest international event of the sector will organize the 9th International Flour, Feed, Semolina, Rice, Corn, Bulgur Milling Machinery and Pulses, Pasta, Biscuit Technologies Exhibition together on 11-13 March 2021 under the name IDMA AND VICTAM EMEA.
Turkey-based Parantez International Fair, known for the successful international grain and feed milling exhibitions it has organized, and Netherlands-based Victam International B.V. joined forces for IDMA - International Flour, Feed, Semolina, Rice, Corn, Bulgur Milling Machines and Pulses, Pasta, Biscuit Technologies Exhibition held in Istanbul every two years.
IDMA Exhibition which will be held in Istanbul for the 9th time on 11-13 March 2021 will be organized under the name IDMA AND VICTAM EMEA in the forthcoming process with the expertise of the two giant companies.
The two companies which set out with the motto "International event of the grain and feed milling industry" aim to create a significant added value with this cooperation by bringing together all the components of the grain, feed and pulses sectors on a stronger and more extensive platform under the roof of IDMA AND VICTAM EMEA. Parantez & Victam cooperation will provide both exhibitors and visitors with great convenience and significant advantages in marketing, sales, and operational activities. It will also contribute to the faster growth of companies in international markets.
Victam International, which organizes the biggest events of the animal feed processing sector in various locations of the world, will strengthen its presence in Europe, the Middle East, and Africa with this cooperation.
Sebas Van den Ende, General Manager of VICTAM International BV, points out that both parties signing the agreement are aiming to have the strongest and largest event in the region. Van den Ende continues his speech as follows: “This cooperation provides an entry into the region for Victam and a strategic path for IDMA to respond to growing competition. This cooperation, which adopts a win-win strategy, may create a synergy in sales, marketing, and operations and may be a proactive answer for companies wishing to enter the region. The cooperation aim is to have a long-term cooperation for the benefit of both parties.”
Parantez International Fair, the organizer of IDMA Exhibition which is notable for its international success, aims to develop a new synergy with the new partnership focusing on growth in the sector. Zübeyde Kavraz, Chairwoman of the company, emphasizes that this cooperation will open up new horizons for both the industry and IDMA.
Pointing out to the significance of partnership for strengthening the sector, Kavraz said the following: “We live in a period where food safety and sustainable production are at the forefront. Therefore, the development and strengthening of cereal, feed and pulses sectors of which Parantez and Victam are a part of, are extremely important in terms of ensuring food safety and sustainable production in the world. Because cereal and pulse-based foods and animal products continue to constitute the most basic food sources of human beings. More than 600 million tons of wheat and corn are milled annually, and the flour obtained from them is consumed as for noodles, bread, pasta, etc.
The volume of global grain processing technologies was $ 4.2 billion in 2018. According to recent market researches, the sector will reach $ 6 billion by 2025.
Thanks to this cooperation, in Istanbul will be exhibited the technologies of the compound feed and grain markets, of which annual trade volumes are $ 500 billion and $165 billion respectively according to the International Feed Industry Federation (IFIF).
Demand for flour and bakery products is expected to increase in the forthcoming period, especially in regions with higher population growth rates. At this point, the most important regions are; Sub-Saharan Africa, the Middle East and North Africa along with Southeast Asia. Because Turkey is one of the main centers of grain processing technologies industry and it is close to Middle Eastern and African countries where flour demand is expected to grow, so this provides Istanbul strategical advantage in terms of milling exhibition.
IDMA exhibition has received the support of national milling associations of 40 countries. Besides, Turkish-Netherlands Friendship Association gives strong support in the formation of this cooperation.