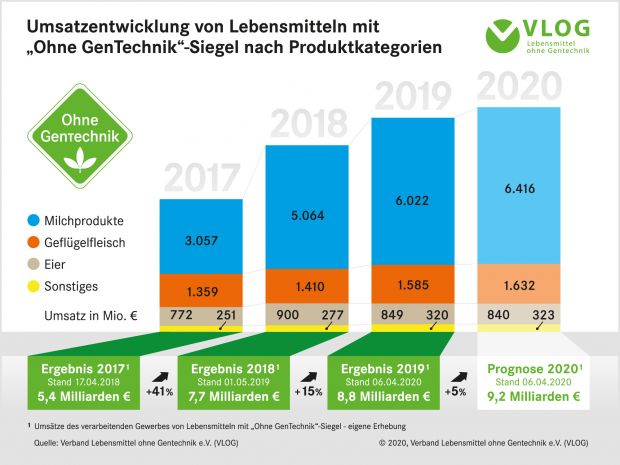 
In 2019, manufacturers and processors achieved a turnover of around 8.8 billion with goods bearing the "Ohne GenTechnik" seal.  In the shops, end customers spent around 11.3 billion euros on them. Compared to 2018, this represents an increase of 15 percent, reports the German Association of Food Without Genetic Engineering (VLOG). It expects consumer spending to increase to at least 11.8 billion euros in 2020.
In the meantime, "Ohne GenTechnik" products already account for more than five percent of total food sales in Germany. "After the enormous growth in milk and dairy products, we are now seeing a consolidation of our growth," commented VLOG Managing Director Alexander Hissting on the figures. "Compared to milk, there is still a lot to be done with pork in order to finally meet consumer expectations for "Ohne GenTechnik" products. Contrary to what consumers assume, 99 percent of the pigs in Germany are still fed genetically modified soya. Around three quarters of all German soy imports end up in their feed troughs.
"In order not to jeopardise the success of the "Ohne GenTechnik" seal and to ensure transparency and freedom of choice for consumers in the future, the EU Commission must finally take action and initiate research into detection methods for products of new genetic engineering. Economic operators and national authorities must be able to track them down reliably," demands Heike Moldenhauer, EU Policy Advisor of the VLOG in Brussels. "Even though rape and soya are only two plants that are cultivated in two countries, our members must be able to exclude the possibility of genetic contaminations entering their commodity flows through imports from the USA and Canada.
In 2019, the processing industry with food products bearing the "Ohne GenTechnik" seal had a turnover of 8.78 billion euros. Milk and dairy products played the most important role with 6.02 billion euros (69 percent). Poultry meat products accounted for 1.59 billion euros (18 percent) and eggs for around 850 million euros (9.7 percent). The figures are based on information from licensees of the "Ohne GenTechnik" seal. All figures refer to the turnover of the producers. The final consumer expenditure for "Ohne GenTechnik" products is increased by the margin of the food retail trade and the value-added tax and is likely to be on average approximately 27 percent higher than the manufacturers' sales, estimates VLOG, bringing the total to 11.3 billion euros. On the basis of the forecasts of the current licensees alone, the association expects the "Without Gene Technology" turnover to increase by at least five percent in 2020.
The legal basis for the seal is provided by the EG-Genetic Engineering Implementation Act . In 2009, the then Federal Minister of Agriculture Ilse Aigner had the uniform "Ohne GenTechnik" seal drafted. In 2010, she transferred licensing and control of the "Ohne GenTechnik" seal exclusively to VLOG.