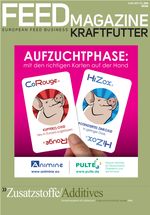 Nowadays modern Poultry production focuses more and more on aspects of animal health and animal welfare next to optimized biological performance. This includes as key target ensuring an ideal gastro-intestinal functionality of the birds. Now a novel approach to achieve this target in broiler nutrition is given by supplementation of a microbial muramidase breaking down peptidoglycans in the gut. This approach goes far beyond present mode of actions from enzymes and eubiotics.

Within the context of adapting fertiliser and fertilising laws and ordinances and the current discussions on climate-relevant impacts of agriculture, the focus keeps on shifting to emissions from dairy cattle husbandry. It should be taken into account here that modern dairy cattle husbandry is not an end in itself. Generally, the keeping of dairy cattle serves to produce milk for human consumption. The target should therefore be the most efficient possible milk production. In this connection efficiency does not only mean cost efficiency, but also optimising the utilisation of nutrients.

»Good communication – a recipe for success
What matters is how it arrives
We humans are constantly communicating with one another. And we don’t even need to talk to do this. We can communicate without words, simply by our gestures, our facial expressions and our body posture (which we also call body language) – at any time and anywhere.

Milk protein and vegetable fat are the starting materials for the whey fat concentrate produced by the French company Bonilait. Working in the milk replacer segment itself too, Bonilait supplies producers of milk replacers and compound feed plants with this whey fat concentrate. Located in the west of France in Chasseneuil near Poitiers, supplies of the raw material whey are ensured by farmers in the region. Bonilait belongs to the French Cooperative Sodiaal.