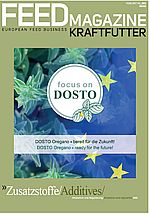 The market for feed additives is characterised by supply bottlenecks in international trade. There is a shortage of containers and freight rates are skyrocketing. Lysine in particular is a sought-after additive, but supplies of vitamins and trace elements are also affected.

The word ‘glucan’ refers to polymers of glucose that include cellulose (β-1,4-glucan). They are branched or unbranched, short or long, soluble or particulate, and in α or β isomeric forms. β-Glucan is one of the most common types of polysaccharides. β-Glucans are naturally occurring polysaccharides of d-glucose monomers linked by β-glycosidic bonds. They serve as energy stores and structural components of plant, algal, fungal, and bacterial cell walls.

EU Regulation 1831/2003, which came into force in 2003, contains a complete reorganisation of the marketing and use of feed additives in the EU. Gradually, all feed additives must be re-authorised under new conditions. Among other things, this also concerns natural flavourings such as essential oils and extracts. FeedMagazine talked to Dr. Manfred Lützow, saqual GmbH, consultant for feed and food safety and regulatory matters, including authorisation issues, and Thomas Logemann, managing director of Dostofarm GmbH, one of the largest suppliers of essential oils, especially oregano oil as active ingredients in animal feed.

Lignans are a large group of naturally occurring polyphenols which are widely spread within the flora. Lignans can be found in flax seeds, tea, some fruits, whole wheat flour, cereals and bark of trees. They are widely used in folk medicine and have been shown to have anti-inflammatory, antimicrobial, and antioxidant effects that could be an alternative to antibiotic growth promoters in many regions of the world. However, in Europe antibiotic growth promoters are long banned and sustainability of meat production is of paramount importance.

When evaluating antibiotics, there is a very wide span between good and bad. Because they are very useful in treating illness in humans and animals, we should take care that we keep the substances effective. The excessive and prophylactic use of antibiotics cause resistances in microbes, which can pass to other germs and make the antibiotics useless. So antibiotic resistance ranks as one of the most severe health risks in the future.

Zinc is an essential trace element and influences the cellular growth and development of the organism in many ways. More than 300 enzymes contain zinc as a structuring element, an undersupply of zinc quickly leads to deficiency symptoms. For this reason, zinc is always added to feedstuffs to cover requirements.

Pork producers typically strive to produce more pigs per sow per year. However, given the fixed costs associated with each introduced gilt, sow lifetime productivity has a significant economic impact.

Detailing an accurate and comprehensive depiction of the mycotoxin landscape across Europe, the newly released findings from the Alltech 2021 European Harvest Analysis program provide livestock producers and feed mills with vital insights into the challenges they face with this year’s crops.