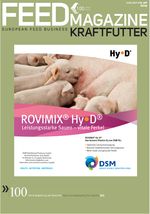 
This issue brings the jubilee year to a close for FeedMagazine/Kraftfutter. However, the new layout and the innovative sector will continue to ensure that this magazine can carry on satisfying the information needs of the feed industry with fresh wind in its sails in future too.

Climate change, a growing world population and sustainability: the biggest challenges for the feed industry are making early warnings (EWS) and traceability (Tracking & Tracing) increasingly important. In addition to preventive measures for controlling risks, tools are required for corrective measures in case of a contamination.

Production levels of milk and meat are rapidly increasing. Through breeding, nutrition and management milk production per cow has been on the rise for decades. However there is also more attention for animal welfare, the use of antibiotics and milk quality.

Valorisation of proteins
To work the protein differently

The open day organized by Cizeron Bio in Mid June in La Gimond (Loire département, south-east of France, Auvergne-Rhône-Alpes region) aimed at presenting the last investment of the company : a new tower of production, fruit of two years of research and development on the valorization of the protein. With the idea of consuming, in organic animal nutrition, fewer available proteins, but of better quality.

Humic acids are a sub-group of humic substances. These are ubiquitous in the environment and develop during the decomposition process of biological material through “humification”. The humic acids that occur in nature are non-uniform chemical compounds. Humus, lignite, turf, bodies of water and humified higher plants as natural raw material sources enter into consideration as suppliers of humic acids. This makes them one of the most widespread forms of organic material in the world.

Is the supply chain for non-GMO feed secured?
Increasing demands from the food trade

In times of selective nutritional requirements set by consumers, food retailers are outdoing each other in establishing ever more programmes in order to secure their sales. The ”non-GMO“ segment is one of these and is growing rapidly especially in the milk and dairy sector. The feed industry suppliers are responsible for providing seamless traceability records documenting procurement of feedstuffs produced without genetic engineering. FeedMagazine talked to Gerhard Lehmann, who has been at work on securing non-GMO feed for 15 years now.


Do you have any questions or comments on this article?
Please email the editor.