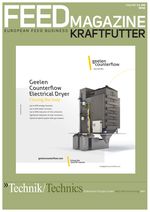 The grinding, extrusion, drying, coating and cooling of one metric ton of petfood requires between 250 and 380 kWh of thermal and electrical energy. Accounting for about 50% of that is the dryer. For a 10 ton per hour dry petfood production line, companies typically spend between 200000 and 300000 dollars per year on gas. So where better to start to improve a petfood plant’s energy efficiency, reduce its CO2 emissions and lower its operational costs?

High-performing farm animals are permanently exposed to different kinds of stress. Continuous and even temporary strain results in oxidative stress, which is defined as an excess of free radicals (Mc Cord 2000).

Opportunities and risks influence the business prospects of the companies working in the feed industry. The growing world population and rising prosperity in population-rich emerging economies indicate a higher demand for foods of animal origin in future. Consequently increasing animal production with the associated rise in demand for feed can be considered the largest opportunity for the industry, but not all regions will be able to profit from this. The positive expectations are also being damped by a number of risks.

5N Plus, a Canadian Company and a leading producer of specialty chemicals and engineered materials recently announced its entry into the animal feed market. The investment in a new production facility will take place in Eisenhüttenstadt near the German-Polish border.