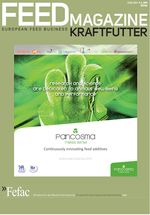 
»Legislative adjustments in the feed segment
Adjustments at state, federal and European level

In recent months fundamental decisions have again been taken which are of decisive importance for the feed industry. There are also legislative projects in the consultation process at federal level which will affect current practice. In addition, there are some significant developments at state level. Besides various enactments for implementing section 40 (1a) LFGB (German Food and Feed Code), the law on fees was also revised in several federal states, among other changes.

Progress in the fields of dairy cattle breeding and management together with new findings regarding performance-oriented and needs-based feeding in the past decades has led to a distinct increase in the milk yield of cows. Nevertheless rising lactation performance is often accompanied by increasing problems with metabolism, fertility and health in dairy cattle. This then leads to the lifetime performance remaining more or less the same after all, due to decreasing the economic lifetime. However, studies demonstrate positive effects of using various (rumen-protected) feed additives on the metabolic health and fertility.

High daily weight gain and good digestibility with healthy swine are major conditions for effective pig fattening. Swine, and especially piglets, are particularly sensitive compared to other livestock with regard to smell and taste of feed, which can influence feed intake (1). In addition, pathogens and toxins can affect the animal immune system by colonising the gastrointestinal tract, with adverse effects on performance and health (2).
Rerferences

»Social Media
Useful, or a waste of time?

Relationships with others are of fundamental importance to human social life. Our life world is shaped by interaction. We communicate in analogue mode face to face, digitally via email, by phone, letter, and sometimes even still be fax. For several years, the vast and colourful world of social networks and Messenger Services have been established communication channels. WhatsApp, Twitter, Facebook, Instagram, LinkedIn, Xing, Snapchat, TikTok, Threema & Co. have long since taken over everyday life for millions upon millions of users. And it seems that another new provider comes along every month.

Cycle and fertility disturbances, abortions, smaller litters, lower birth weight – all possible consequences of zearalenone (ZEN) contamination in feed. ZEN is a mycotoxin found worldwide which can be formed by fusarium moulds in maize and wheat and also other species of cereal and agricultural crops.