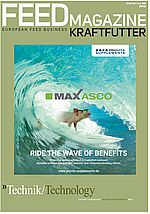 For many years, animal welfare, animal health and animal nutrition have been a core topic at AMANDUS KAHL. Based on this, the development of a new roller mill was promoted, which is ahead of its time. The crushing roller mill with individual drive not only enables different feeding needs of the animals to be covered, but also the individual components to be prepared in an age-appropriate manner. This also includes cereals such as rye and barley, which were previously considered difficult to process with a roller mill.

The reduction of antibiotic use in agricultural animal husbandry in order to prevent antimicrobial resistance is a recurring topic of both scientific and social debate. Furthermore, not least against this background, the use of zinc oxide in piglet feeding will be increasingly restricted and completely banned in the near future, with heavy metal excretion and the associated environmental pollution also playing a role here. These are only two examples of the rapid changes in the framework conditions with which pig farmers and piglet producers are confronted.

»A new harvest – a new challenge?
Problem case ergot alkaloids
While the surprisingly high zearalenone content in sugar beet was the main topic of discussion in the previous harvest year (QS, 2019), a new, well-known challenge is emerging in this harvest: Ergot alkaloids in grain! QS, for example, but also various analysis laboratories, such as Agrolab and Synlab, warn of a strongly increased occurrence of the ergot fungus Claviceps purpurea in grain. The strongly increased occurrence, as well as the planned changes to the EU limit and orientation values for mycotoxins, should prompt us to (increasingly) include the mycotoxins of ergot - the ergot alkaloids - in our risk management.

Mycotoxins such as Deoxynivalenol (DON) and their negative impacts on animal health and biological performance constitute a hardly avoidable risk in feed formulations. Current surveys show a frequent occurrence of these secondary metabolites from different moulds. Moreover, the growing genetic potential of high performing breeds comes along with an increased sensitivity of the already challenged metabolism towards negative factors, such as mycotoxins.

Protozoal infections such as coccidiosis are widespread in livestock production. They are the cause of enormous economic disruption to poultry production and subsequently to the entire downstream sector. Global losses, including production losses, disease prevention and treatment costs, amount to more than $3 billion annually (Dalloul and Lillehoj, 2006). Not only due to a growing threat of pathogen resistance because of the longstanding use of chemotherapeutic agents, there is growing pressure – especially from food retailers and consumers – to prefer natural solutions to support keeping poultry healthy. But which natural alternative is truly effective?

»Adequate muscle creatine
Why is it important for broilers?

Birds are omnivorous species, they are evolutionarily designed to consume products from plant and animal origin. However, for several reasons, poultry nutrition is shifting more and more to a vegetable diet. This shift has resulted in losing some important benefits of animal products, including creatine, an essential compound found in meat but not in plants.

Humic acids are high molecular weight and form a subgroup of humic substances along with the low molecular weight fractions. Humic substances are formed during the degradation process of biological material through “humification” and are ubiquitously present in the environment. The naturally occurring humic acids are characterised by complex chemical compounds. Humic substances and humic acids can be obtained from various source materials such as humus, lignite or peat. This makes them one of the most widespread forms of organic material in the world. In order to subdivide the humic substances, the different solubility in water and the functionality can be used as characterisation features. In the following article, primarily the high-molecular humic acids of the WH67® type are discussed.

Hamlet Protein is an established supplier of soy-based protein for young animal nutrition. With renewed vigour, the company is moving into new markets.

»Animal nutrition of the future
What tasks must it fulfil?