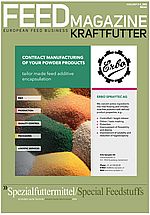 Although trace elements are typically used in feeds at a few milligrams per kilogram, they are the key to maximizing animal health and performance. Over billions of years, animals have developed complicated and precise mechanisms to exploit the reactive nature of these metals and maintain an effective balance between deficiency and toxicity.
Literatur Mertens

Determining mixing precision using Microtracers® is an accepted Standard form of quality control for checking the quality of mixing processes when producing premixes and feedstuffs. The mixing precision of special feed additives such as, for example, herbal mixtures can be determined, representatively by Microtracers® even though these additives possess other physical and chemical properties.

Trace elements like copper, zinc and manganese are indispensable for good health and performance. An optimal supply of trace elements from high quality mineral substances is necessary in order to avoid deficiency symptoms and associated health problems. The Hydroxy Trace Elements of the new generation (Excential Smart Product Range from Orffa) are easily available to the animal, without any negative influence on the stability or uptake of other nutrients, the health of the digestive tract or the health and function of the rumen. They contribute to the animal being optimally supplied with trace elements which in turn leads to improved animal health and performance.

Lipid encapsulation has proved to be a valuable tool for protecting nutrients against reduction during processing, storage and digestion and making them available for uptake by the livestock. In past five years, many encapsulated nutrients have been introduced onto the market. The products and the processes by which they are made differ strongly in their design, the technology and unfortunately also their performance.

In these days not only private persons pay attention to avoid social contacts. It is also important for companies to protect their employees. In order not to put additional strain on production in this exceptional situation, a perfectly functioning technology is essential. A fast, competent and as cost-efficient as possible fault and process service is therefore becoming increasingly important. This is where digitization and especially Service 4.0 delivers powerful advantages - not only in times of “social distancing”.

The intestine and its ecosystem have immense relevance for health and the immune status. But we know very little about it as this system is an equation with thousands of variables. This article presents some trials to give insight into the benefits of dietary fibre on gut health and immunity. Fibre supplementation by eubiotic lignocellulose offers interesting perspectives regarding modulation of gut microbiota, resulting in reduction of pathogenic bacteria (ETEC), in addition with anti-inflammatory properties.
Literatur Neufeld

The outbreak of the corona crisis has resulted in increased business for feed manufacturers in many places, as hamster purchases from food manufacturers have also had a positive impact on the upstream industries. An important Swiss animal feed manufacturer, had the best month of sales since the company was founded in 1926. Even now, sales are relatively constant because the industry is system-relevant. In addition, you are used to working under the currently increased hygiene regulations and are generally subject to strict regulations.

Brewer's yeast – Saccharomyces cerevisiae – is a fungus (eukaryote) whose ability to ferment alcohol and carbon dioxide has been proven in many ways. Leiber GmbH has made it its business to collect and refine brewer’s yeast as a by-product from the brewery. In animal nutrition, the brewer’s yeast cell walls obtained by refinement in a specific process are marketed worldwide under the Biolex® MB40 brand. The main effects of brewer’s yeast cell walls in animals are the prebiotic effect, the binding and inactivation of certain pathogens and mycotoxins, intestinal support and immune defense.