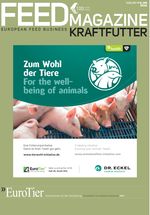 »The effect of probiotic yeast on gut flora revealed


Since the beginning of the 1950’s, antibiotic growth promoters have played a major role in the development of intensive livestock production, delivering clear animal health and performance benefits and resulting in lower production costs. However, the development of antimicrobial resistance by pathogenic bacteria, associated with antibiotic treatments, has become an important public health concern and the main driver behind the gradual restriction and substitution of antibiotic growth promoters.
Literaturverzeichnis/References

Coordinate the quantity and ratio of L-Valinine

L-valine is one of the essential amino acids for fattening poultry, the importance of which lies in particular in the building of muscle protein. Despite this, use of the amino acid has been limited in the past due to the relatively low level of availability on the market and the correspondingly high price. As a result of the change in market conditions in the past years, however, it is worth looking at the use of L-valine (Val) again. Especially in connection with the currently increasing efforts to reduce protein and nitrogen contents in feed rations, valine can help to optimise the amino acid content and pattern of these rations.

In selecting phytogenic products, research as well as quality control must receive increased attention. When working with the vast potential of nature, where natural variations exist in the raw materials, standardization is key to consistent product quality. Only a few companies know how to standardize natural ingredients for phytogenic feed additives. An interview with experts from Delacon Jacqueline Wolfschlucker, laboratory manager, and Andreas Pichler, quality management.

What mycotoxins are to be found in cereals in what concentrations depends strongly on certain location factors. Climate plays a crucial role here beyond all doubt. That is why the field fungi, storage fungi and mycotoxins to be found in German cereals generally differ from those found in cereals originating for example from Eastern Europe or overseas. But how does climate change affect the incidence? This summer was very warm and dry in many regions. Does this mean that we shall now have fewer problems with mycotoxins in the feed, or will other mycotoxins appear that have hitherto been rarely or never before encountered?

With surgical castration without anaesthesia being phased out in Germany and many parts of Europe on 01.01.2019, pig producers are increasingly looking for alternative welfare and environmentally friendly solutions that do not require too much labour, time and financial investment. And consumers are looking for boar taint-free meat, produced to high welfare standards and without the need for antibiotics. Such a solution can be realized with TAINTSTOP via feeding.

Bitter components can lead to pigs consuming less feed. These components can even trigger fullness signals, thus reducing feed intake even further and adversely affecting the animal performance. In the “Innovation Division”" of Lucta in Spain, specialists are working on making the bitterness of feedstuffs more acceptable for pigs.

»Investments to get closer to customers

Spreading out of 25 departments on a Dijon-Marseille line, the Philicot group in Burgundy continued its growth in 2017 by doubling the capacity of its plant in Saint Flour (Cantal) and investing in a new pelleting tower on its Chêne-en -Semine site (Haute-Savoie). Meeting with Emile Nicot, President of Philicot Chagny (Saone-et-Loire) at the headquarters of the company whose main know-how is ruminant feeds.

EuroTier, the world's leading trade fair for livestock professionals, will be presenting innovations and trends for agriculture at the Hannover Exhibition Center from 13 to 16 November, giving orientation. 2,526 exhibitors from 62 countries show a complete range of modern animal husbandry and solutions for the challenges of the future on more than 260,000 m² of hall space.