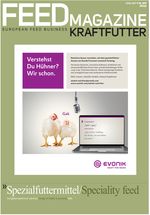 »The importance of gut health in modern poultry farming

The pressure that society and policy-makers exert on poultry farmers to reduce the use of antibiotics has just recently been intensified again. Above all the use of reserve antibiotics, as well as the frequency of therapy in connection with the occurrence of antibiotic resistances has repeatedly come under criticism.

Starch is one of the primary ingredients used in feed, together with protein. But starches from different sources offer a range of functional properties that need to be considered, not only from a nutritional perspective but also for technological aspects.

The poultry sector is confronted with major tasks – the use of antibiotics is to be reduced, and at the same time legal regulations are becoming increasingly stricter. A higher production level is necessary to meet the demand of a growing population for animal protein – and this without losing sight of animal welfare issues, which are becoming increasingly more important for many consumers.

It is well documented that the weaning period is related to environmental and social changes which negatively impact the physiology, microbiology and immunology of piglets. Under commercial conditions the use of high doses of ZnO (2100 to 3100 mg/kg) in post weaning diets has proven to be effective in improving animal performance and reducing piglet diarrhea. More recently, such use has been subjected to general discussion, not just in Europe, due to its environmental impact on soil and water and possible relationship to the development of antimicrobial resistance. There is also evidence that high levels of ZnO in diets may regulate gene expression concerning the modifying of piglet immune response.

Livestock feeding today has changed substantially by comparison with the formulations of the 1980s and 1990s. The rations have become more complex, at the latest following the disappearance of the antibiotic performance enhancers from the feed (2006). Among other factors, the use of acids to stabilise animal performance became standard for most livestock species. The next approach to reducing the supply of antibiotics in animal husbandry followed in May 2015 with the German Antimicrobial Resistance Strategy “DART 2020”.

There are at least five commercially available synthetic amino acids, namely methionine, lysine, threonine, tryptophan, valine. Currently, arginine (Arg) is available which is produced through bio-fermentation. L-Arg is an essential amino acid for chickens due to unavailability of two separate enzymes in urea cycle in the kidney and almost all urea cycle enzymes in the liver (Leeson and Summers, 2001). The mammalian cells have a fully functional urea cycle. Therefore L-Arg is not an essential amino acid in swine. However, new data shows that endogenous arginine synthesis through urea cycle is not enough to cover arginine requirements in swine (Wu et al., 2007). Thus, arginine is named to be essential e.g. in piglets as well. References