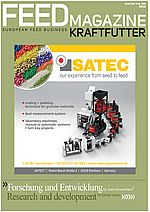 
»Phytoncides and phytoalexins against coccidiosis
Phytogenic substances to replace chemotheraputics

The problem of coccidiosis is known to all breeders and poultry producers. It causes serious losses in world production, estimated by some authors at up to USD 3 billion per year. For several years we have been observing a growing trend to reduce the use of various types of chemotherapeutic agents in animal production. Consumers expect products of animal origin (meat, eggs) to be free from residues of these substances.

»Piglet diarrhoea after weaning
How can the problem be solved without higher zinc charges?

Intestinal health is a concern for everyone involved in pig production. Intestinal diseases are a common problem in piglet rearing that can cause severe economic losses and reduced piglet performance. Weaning is a critical phase in the rearing process, associated with a lot of stress for the animals. Several aspects (psychosocial and physical) contribute to the development of this critical situation: Separation from the sow and litter siblings, a new social hierarchy with unknown piglets and environmental and feed changes (Campbell et al., 2013).

Growth performance and feed efficiency are key parameters indicating the productivity of any fattening unit. Phileo by Lesaffre has conducted several trials proving that Actisaf® Sc 47 (Saccharomyces cerevisiae) is very effective with current genetics and feeding strategies. Most recent data was retrieved from Education and Research Centre Futterkamp, Schleswig-Holstein, Germany.

According to Regulation (EC) No 1831/2003, phytogenic (vegetable) feed additives can belong to the category of both sensory additives or zootechnical additives, with the majority of products available on the market being listed in the first category. Unlike to conventional flavourings, they are flavourings with biofunctional properties. Thus, they not only influence the smell and taste of feed, but also stimulate a number of processes in the animal, which, amongst others, influence the digestibility and absorption of feed ingredients, the creation and stabilization of a physiological intestinal microbiota or the reduction of inflammatory processes in the intestinal epithelium.

An optimally functioning gastrointestinal tract is of critical importance for the metabolism, physiology, performance and health status of the animals. This condition of homeostasis, including a functioning gut barrier, mucosal immune mechanisms and host – microbiota interactions is constantly challenged in commercial animal production.

The European Food Safety Authority (EFSA) and the European Centre for Disease Prevention and Control report a high resistance for commonly used antimicrobials in its summary report (2019). Despite the EU-wide ban of antibiotic growth promoters in animal feed, significant levels of these products are still used in the livestock industry and the search for alternatives remains high on the agenda.

Before addressing these concerns, it may be helpful to understand how sulphate-based trace minerals became so widely used in the dairy industry. Nutritionists have long known that supplementing cows’ diets with small amounts of copper, zinc and manganese is a vital part of supporting functions such as immunity, fertility, production and metabolism.

The focus of modern agriculture is on sustainable, i.e. environmentally conscious and efficient, production of feed and food. The aim is to use resources sparingly and reduce emissions. Two prerequisites for achieving these goals are a high feed conversion rate and animal health.

»Use of rumen pH indicators
Improve rumen health and efficiency

Over the past two years, the cost situation on many cattle farms has again become significantly more tense, not least because of the strained basic feed situation. The willingness to use high-quality bought-in feed components is declining.